Sailing Down a Stone River

A hiking trip to the Taganay National Park 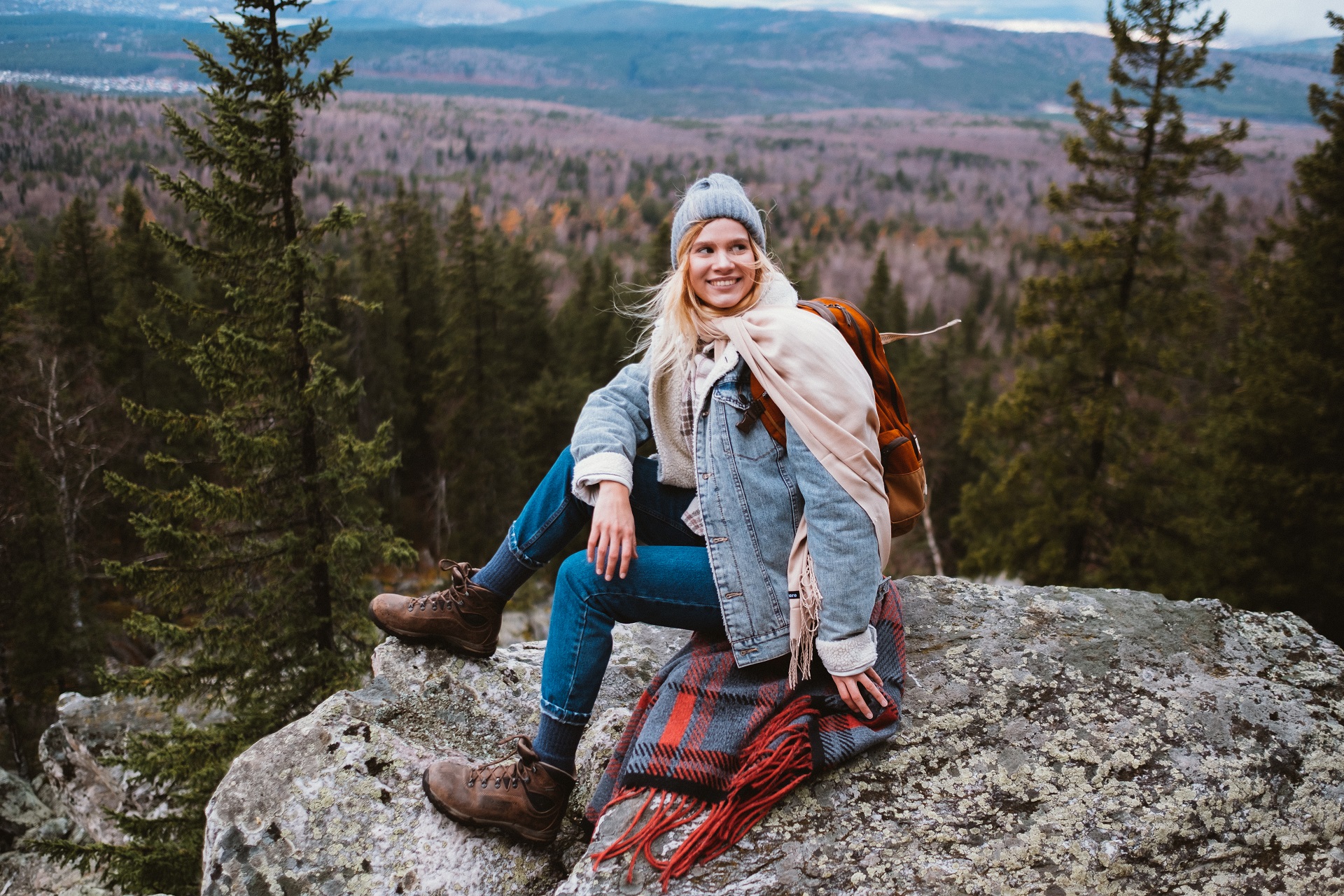 Beloved by locals and tourists alike, Taganay National Park is a great spot for an active vacation. Almost 150,000 people visit the park every year! Some people come for relaxed family outings, while others plan lengthy hiking trips to the mountain peaks. The charm of Taganay entices visitors back to the park over and over again with the sound of guitars echoing along the trails, the fragrant smell of campfire smoke, and the billions of stars scattered across the night sky above.

The park's nature is beyond compare, it boasts endless forests, powerful mountain streams, and vast scatterings of rocks, or kurum, that simply must be scaled. And up above, the wind blows freely through the incredible space under the sky, offering stunning views of Zlatoust and the neighbouring peaks. 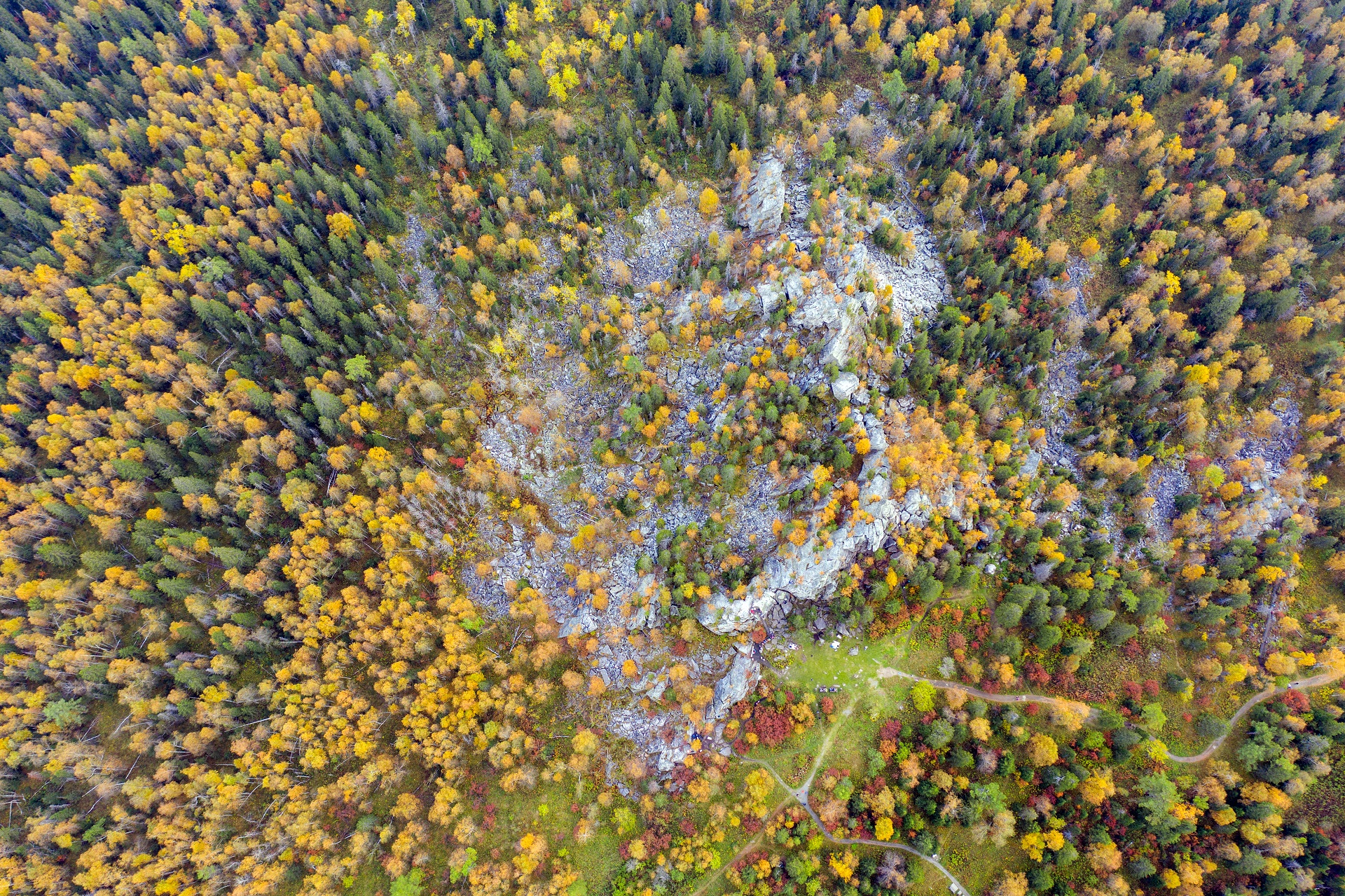 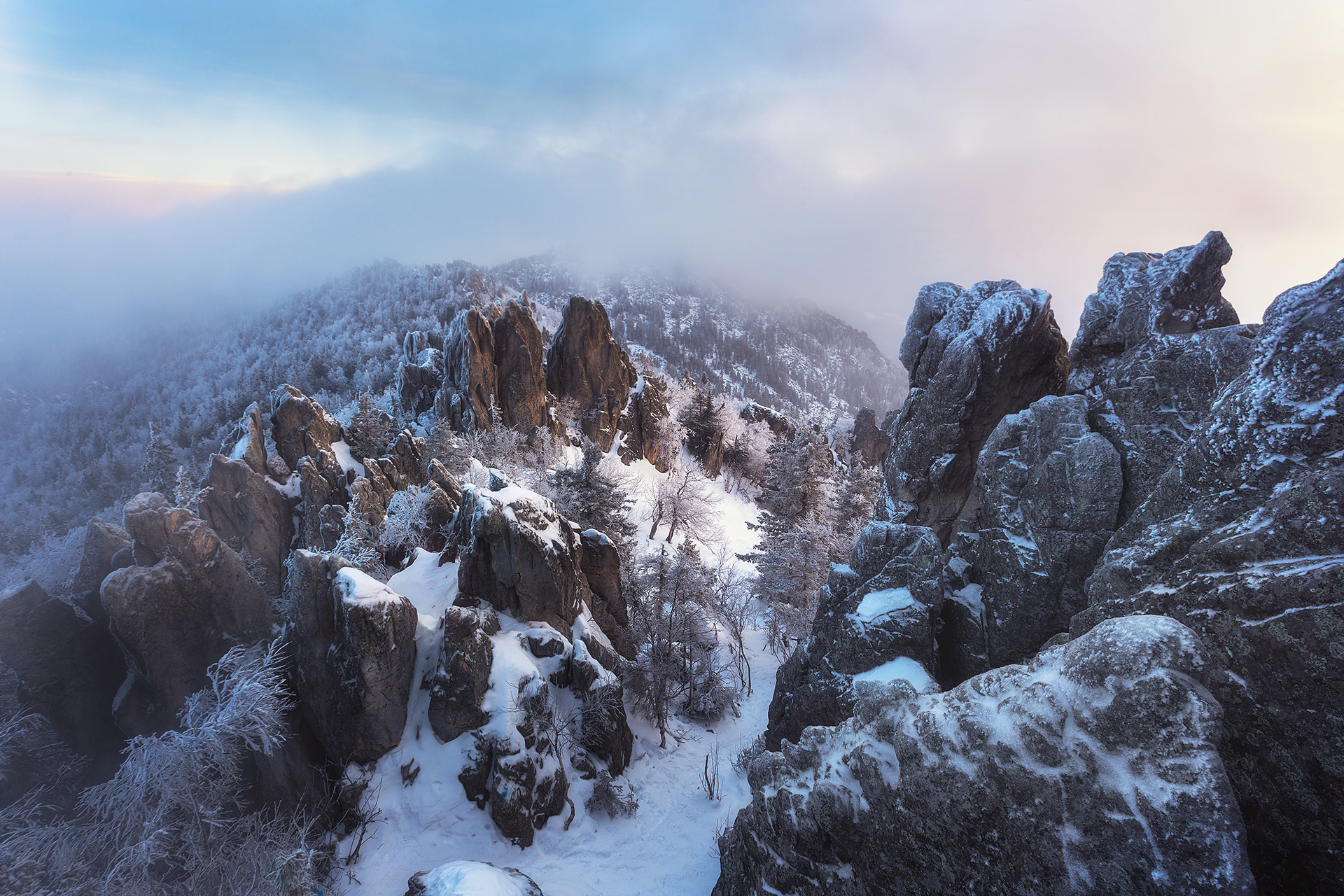 Taganay National Park has some of the best infrastructure in Russia. The trails are well marked and kilometre markers can be found throughout the park. Moreover, the camping grounds are equipped with campfire sites, toilets, gazebos, and places for tents. The trails are open year-round, although we recommend first checking the on-site weather conditions in the National Park's social media group.

This enormous scattering of rocks is a real miracle of nature. The river 'flows' between the Bolshoy Taganay and the Sredny Taganay ridges. It is 5–6 km long and between 20–700 metres wide. Each boulder weighs 9–10 tonnes and they are all stacked in layers.

Supposedly, the enormous stones broke off and rolled down the mountains during an ancient ice age. The kurums were then smoothened by flowing water. 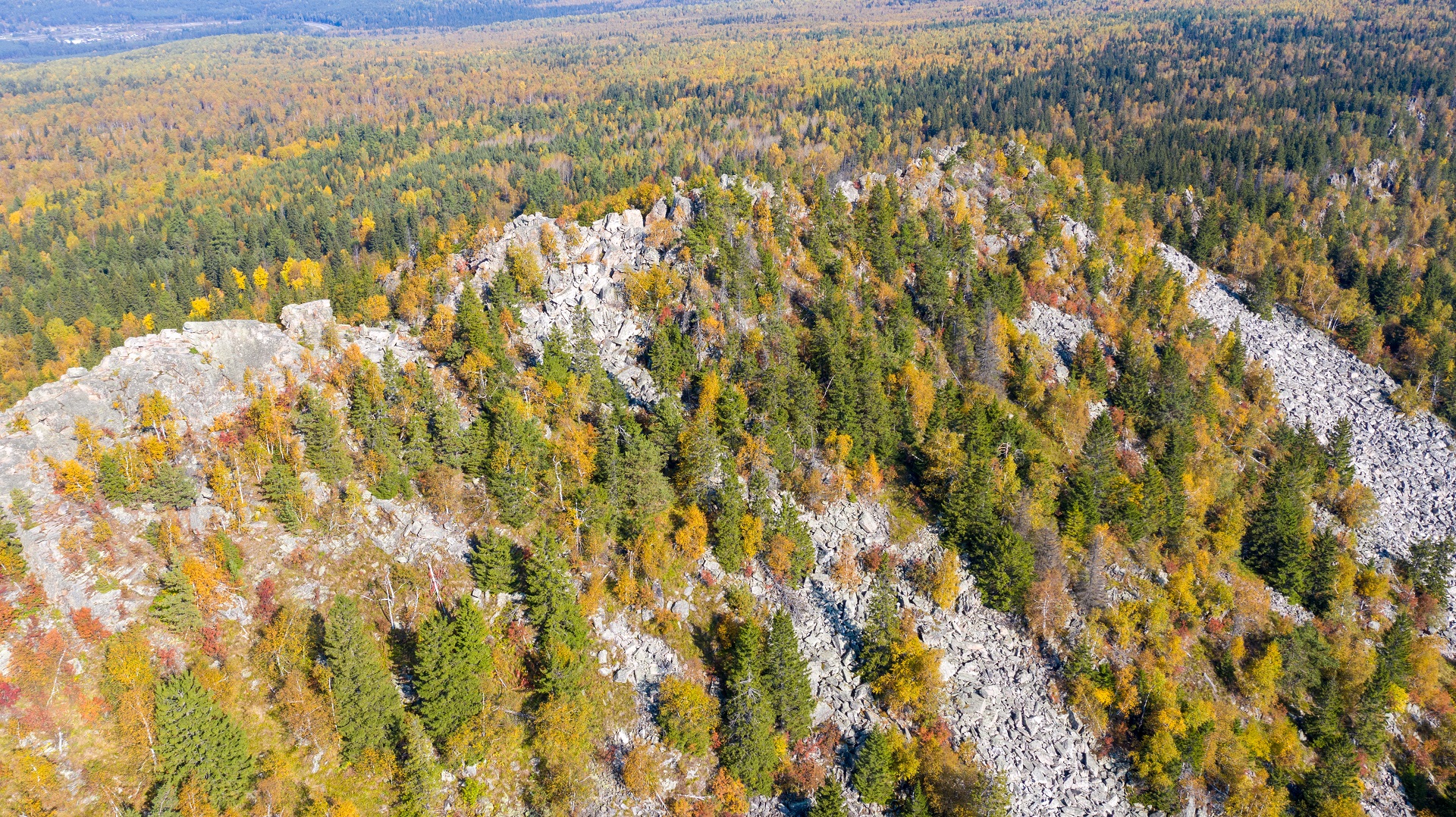 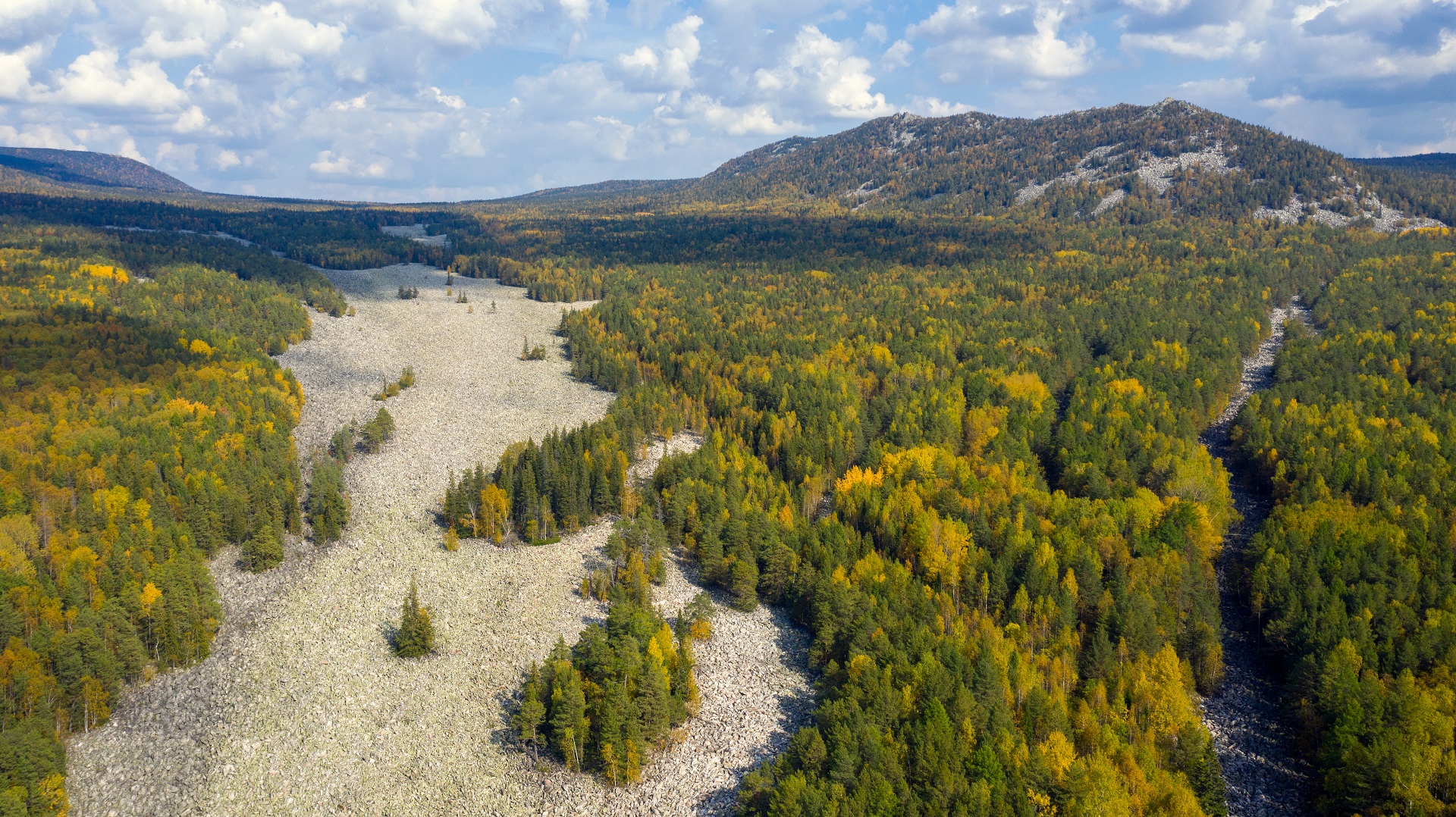 The Bolshaya Kamennaya River bed is mostly made of aventurine, which is a glimmering gemstone. This quality earned it a nickname: Zlatoiskr (Golden Spark). Products crafted from aventurine are believed to improve the mood and bring cheer to whoever wears it.

The Bolshaya Kamennaya River is less picturesque in the winter, so the best time to visit is in the summer or autumn. You will need to mind your step and make sure you don't get your foot caught between the boulders.

This is the nearest summit of the Bolshoy Taganay ridge, as well as the most visited. The name 'two-headed' comes from the mountain's two summits. The southern summit, called Periya (1,034 m), is the former location of the Zlatoust television repeater. The northern summit, called Baraniy Lby, is about seven metres taller. 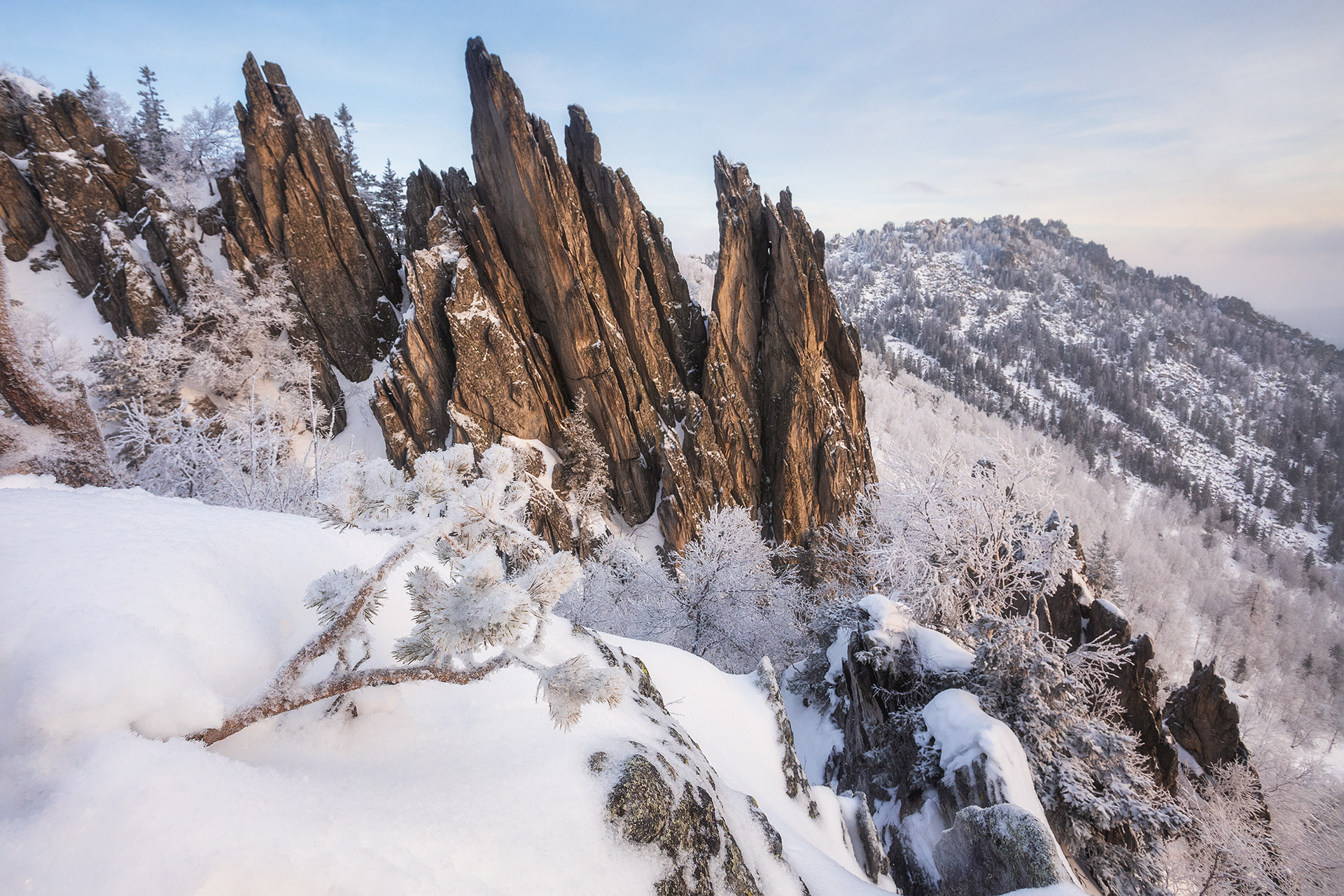 The Two-Headed Hill is a great option for those interested in a day-long mountain hike. It is even accessible to children. The steepest part of the ascent is made easier by a metal staircase.

Long ago there was a tribe living free on the banks of the fast, clear river. The campfires would light up all over the valley at night, and when the moon rose, the valley would be filled with the sound of strings — it was Nazhibek, playing the kurai for the beautiful Aigul.

But Nazhibek could never finish his song before the moon fell behind the horizon. Frustrated, he once yelled:
— Stop, you...!

The earth shuddered, and a mountain sprang forth from it. The moon got caught on the mountaintop and stopped.

The kurai player played for a long time. He played so long that the beautiful Aigul grew old. When Nazhibek realised what had happened, he broke his kurai in anguish. The earth shuddered once more. The moon fell from the mountaintop and disappeared behind the horizon.

The Tagan-Ay — the moon pedestal, that is — now stands as a reminder to lovers to keep their love songs short and sweet.

The Bely Klyuch spring lies at the foot of the Two-Headed Hill. The water in the spring is exceptionally soft and flavourful.

This is the second summit of the ridge. Shaped like a prehistoric lizard, Otkliknoy ridge can be easily picked out in any photo. It rises 1,155 metres above sea level. 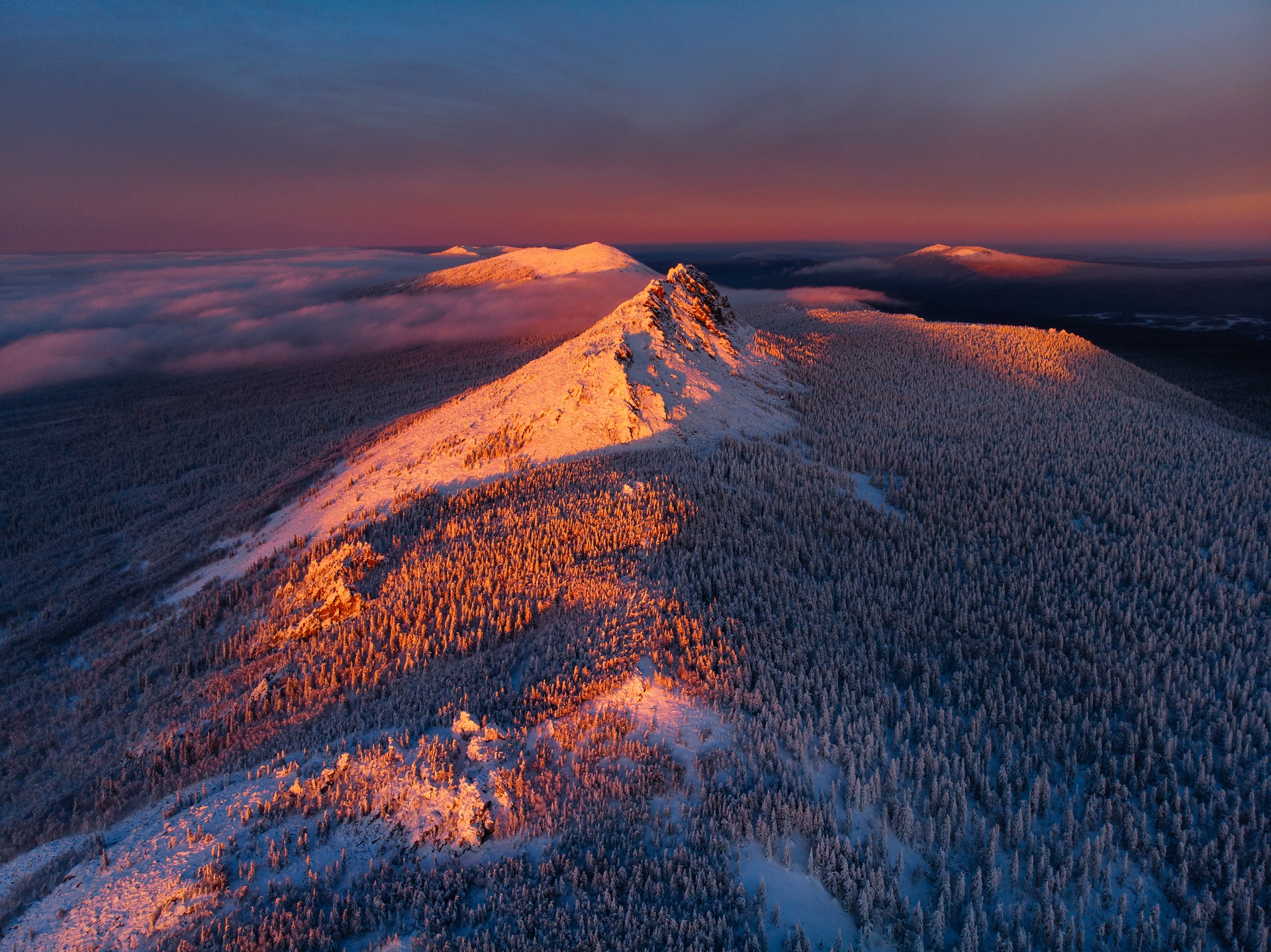 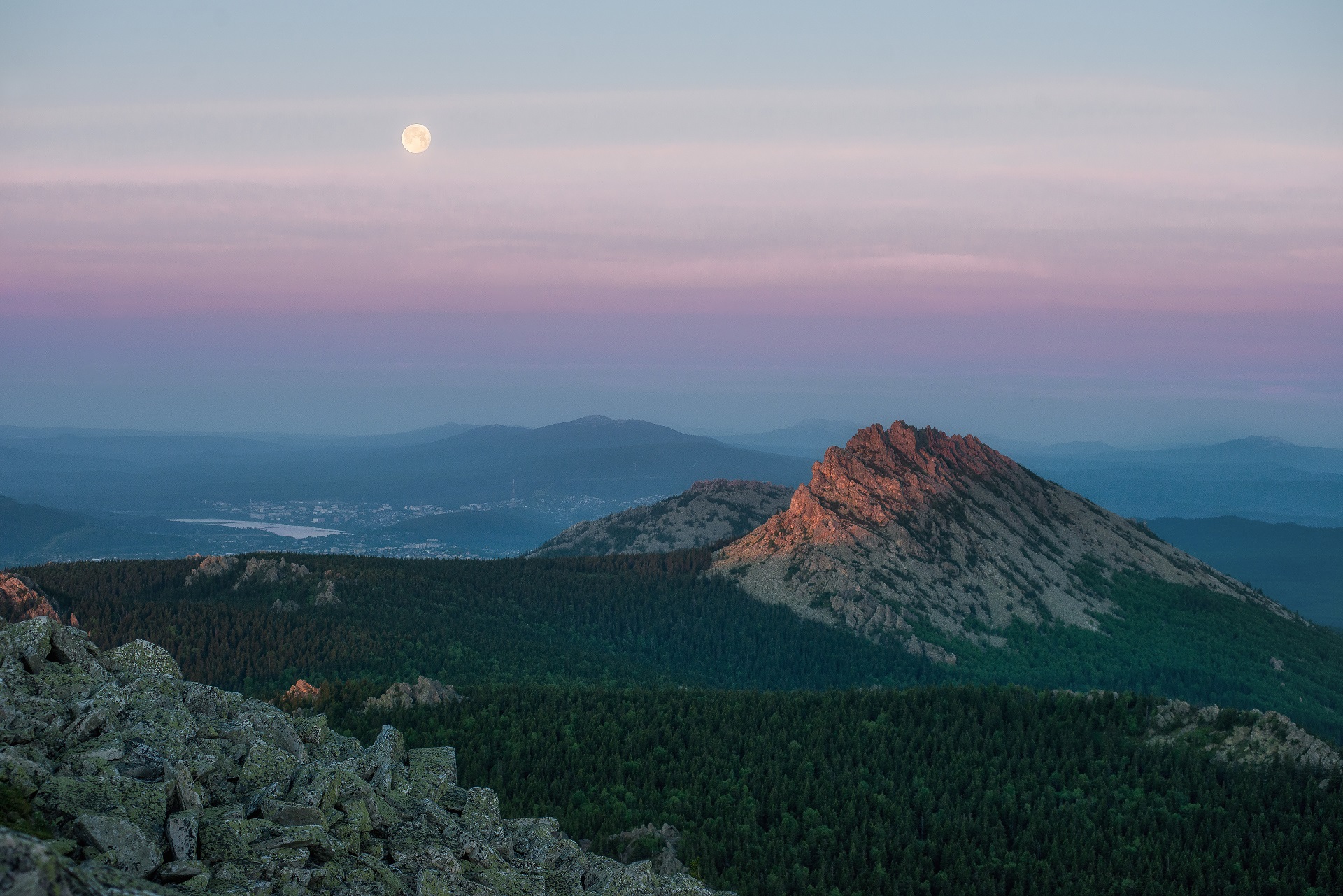 And was named after the Russia word for 'echo' due to the loud echoes that can be heard from the ridge.

Otkliknoy Ridge is just 10 km away from the Central Estate. If you're in decent physical shape, you can reach and descend from the summit in a single day.

A trail passes through the valley from Otkliknoy Ridge to Kruglitsa. The valley is covered in a coniferous forest with unusually shaped buttes that are reminiscent of fairy tale characters. 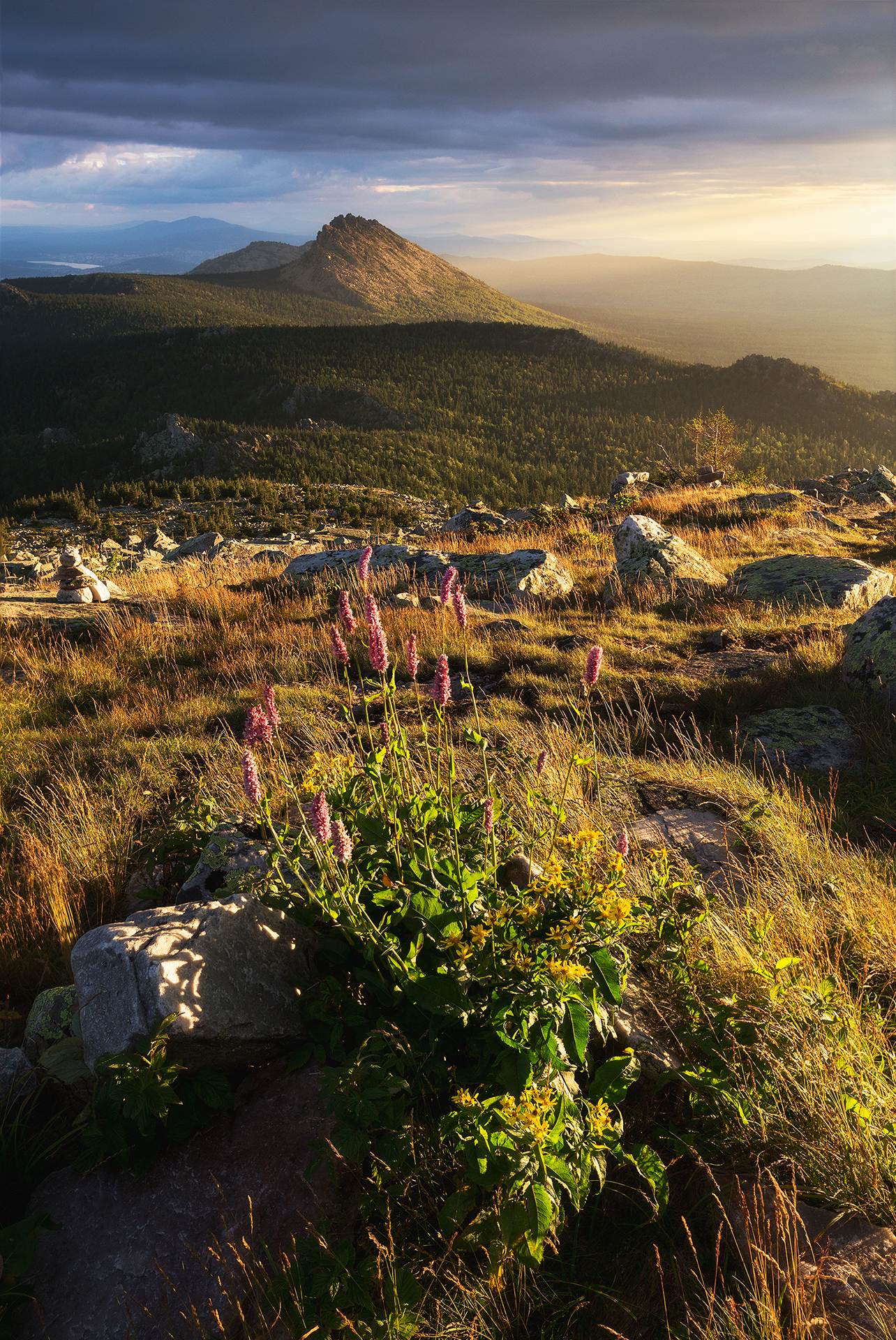 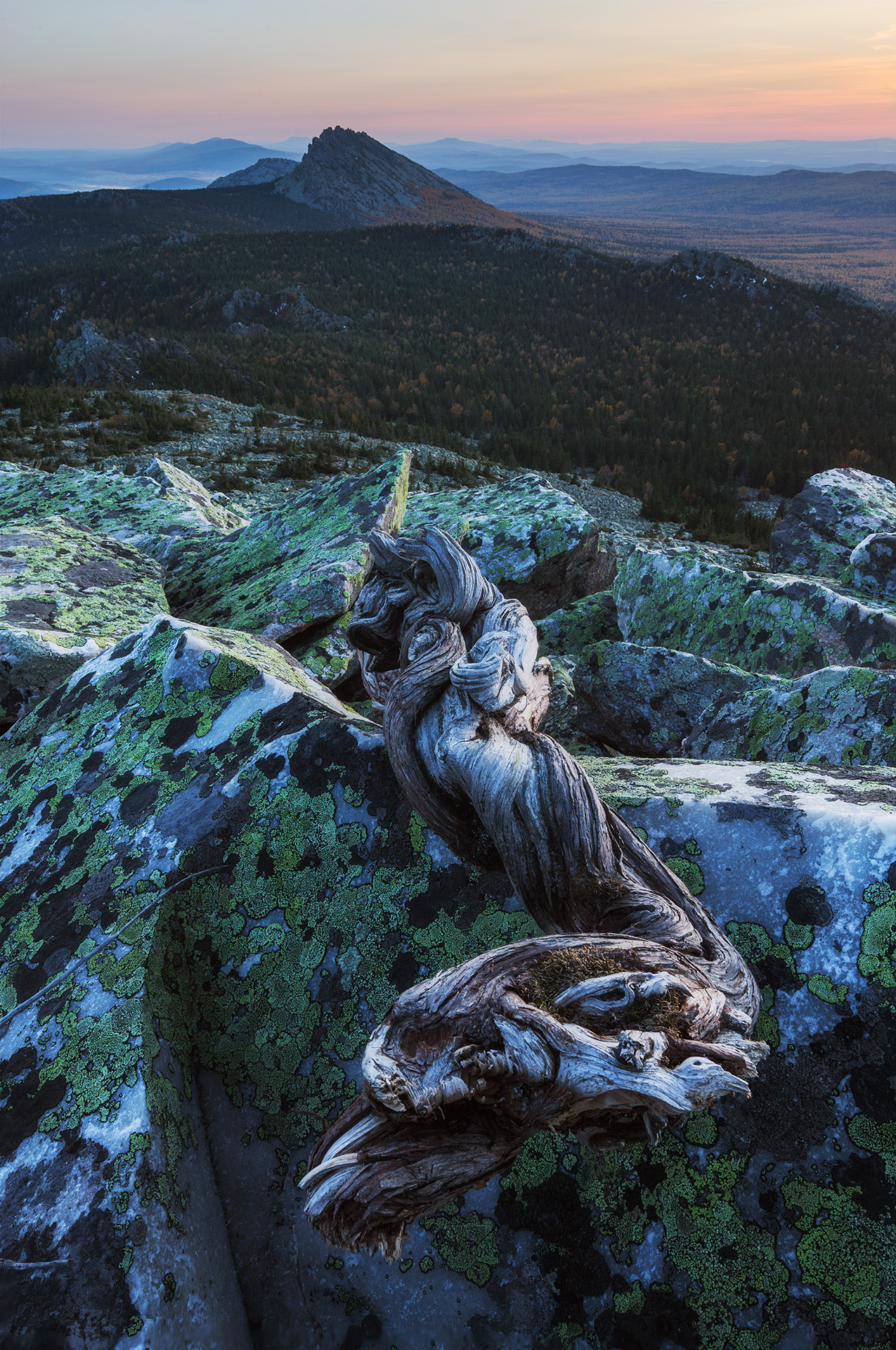 This is the tallest summit in the National Park, rising 1,178 metres above the sea level. The mountain's distinct round shape inspired its name, which comes from the Russian word for 'circle'.

The German scientist Alexander von Humboldt suggested that Kruglitsa might be an extinct volcano. His hypothesis has since gained traction, but it's scientifically impossible. Kruglitsa is made of quartzites, which means that it could not have been a volcano. 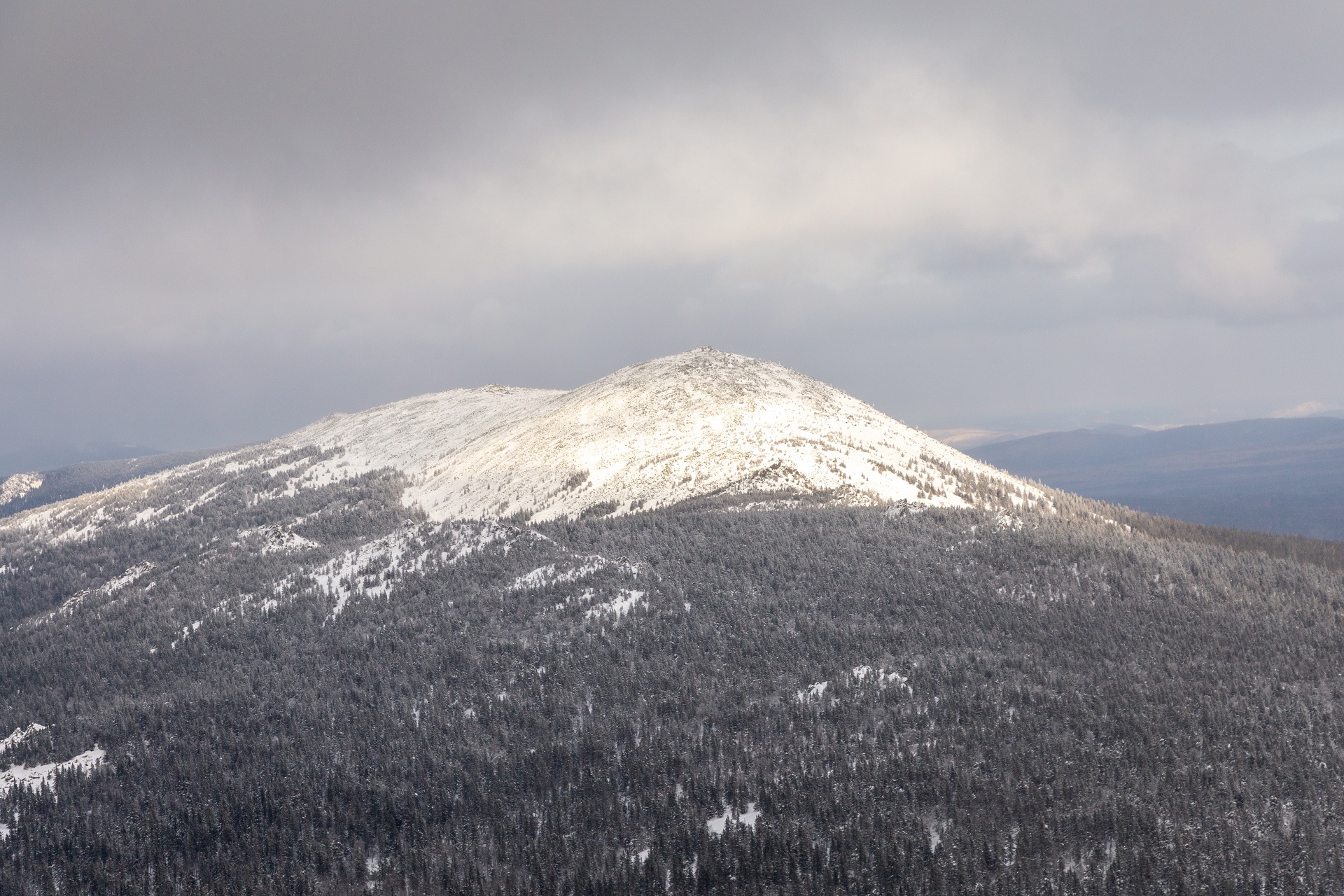 Fun fact: water on the mountain boils at 96 degrees Celsius. This phenomenon is caused by the low atmospheric pressure on the summit of only 660 mm Hg.

Kruglitsa is about 13 km away from the park's entrance. It's the perfect option for an overnight camping trip. The Taganay tourist shelter is located at the foot of the mountain.

A trip to Dalniy Taganay will always take several days. It's located 25 km away from the Central Estate. The ascent to the summit is easy enough, but it can be complicated by the wind. If you're planning to climb Dalniy Taganay, be sure to dress as warmly as possible.

There's a unique site at the top of the mountain: a building that used to house the meteorological station. The station was used to monitor air temperature, atmospheric pressure, wind speed, precipitation, and cloud cover. The meteorological station has been decommissioned in 2005. The building has been repurposed and is now serving as a tourist shelter on the territory of the National Park. 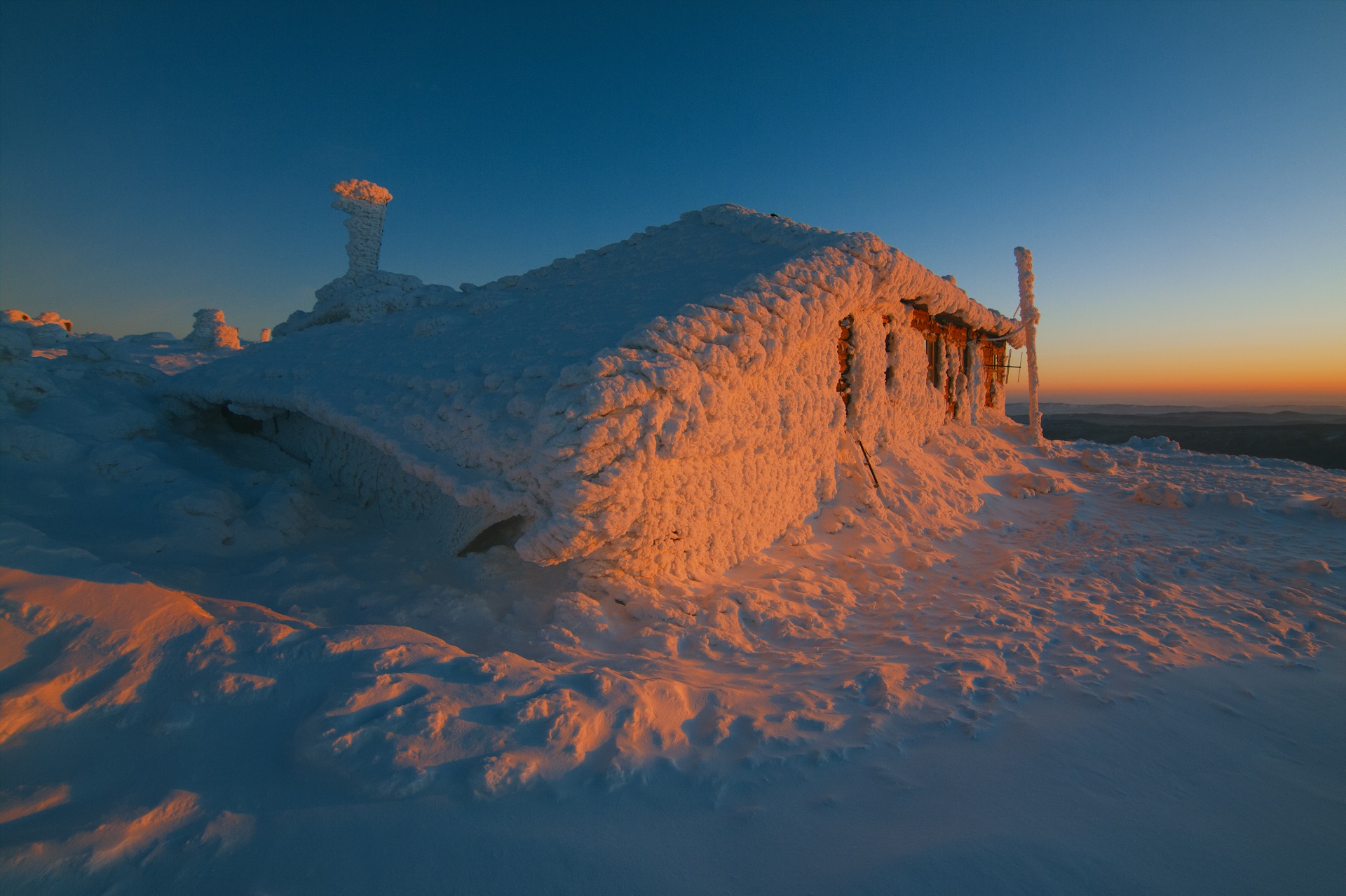 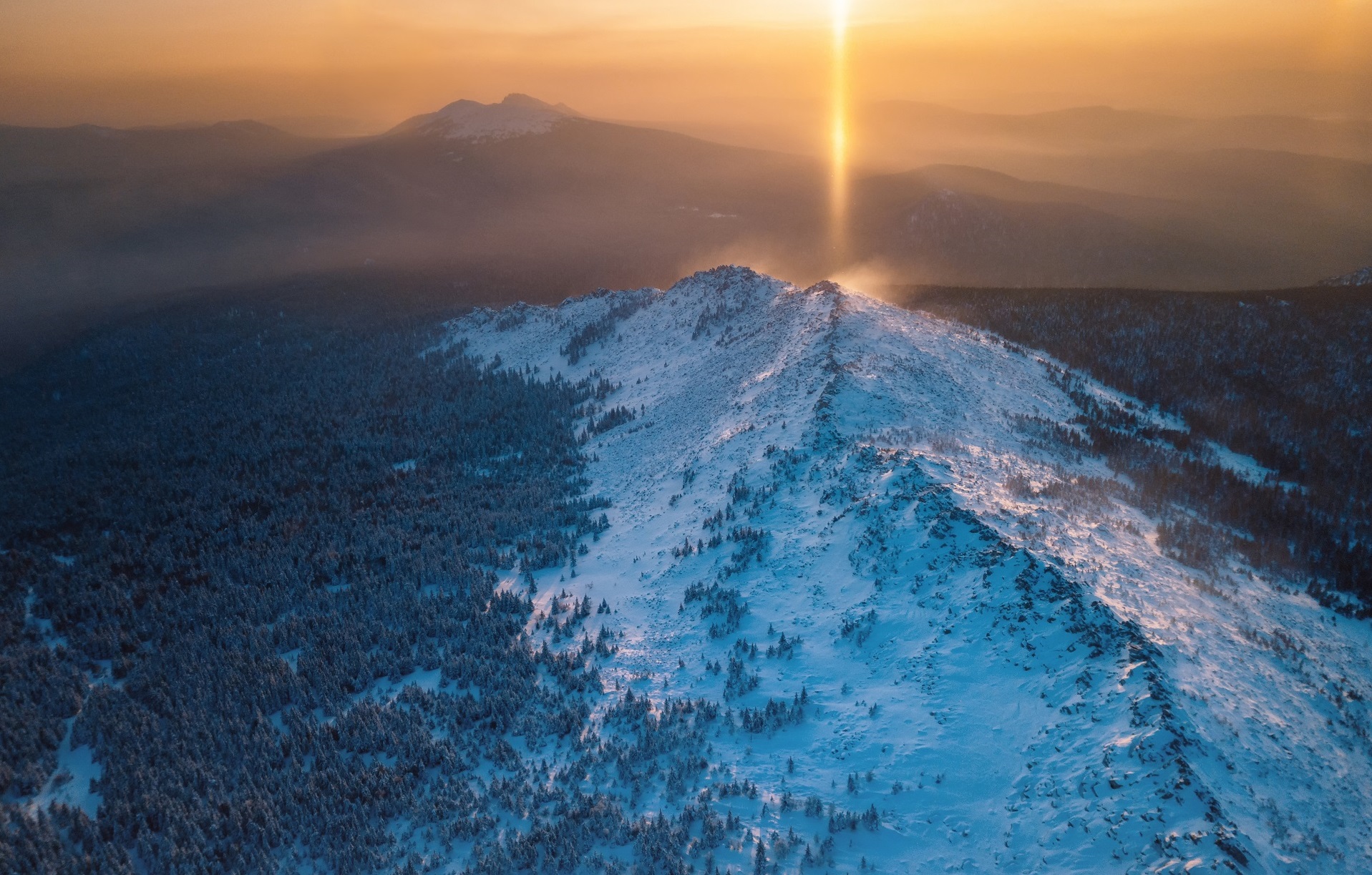 A bit of advice for tourists, to make sure that their walk around the national park is full of happy memories:

— Dress appropriately. This is a nature preserve and the authentic Ural taiga. Wear comfortable shoes without heels and bring warm jackets and hats in the winter. Pack a raincoat if you're visiting in the summer and rubber boots for long trips.

— Learn the rules for park visitors. Don't start fires, don't chop down trees, don't litter, and don't bring your dogs. You can only make campfires in dedicated locations.

— Don't expect the tourist houses to have all of the comforts of a hotel. They are simply an alternative to a tent to provide a roof over your head, a place to use a stove, and cots for your sleeping bags.

— Register at an EMERCOM station several days ahead of your trip.

— In winter, pack some treats for the birds of Taganay. Unsalted pig fat or plain sunflower seeds will do nicely. 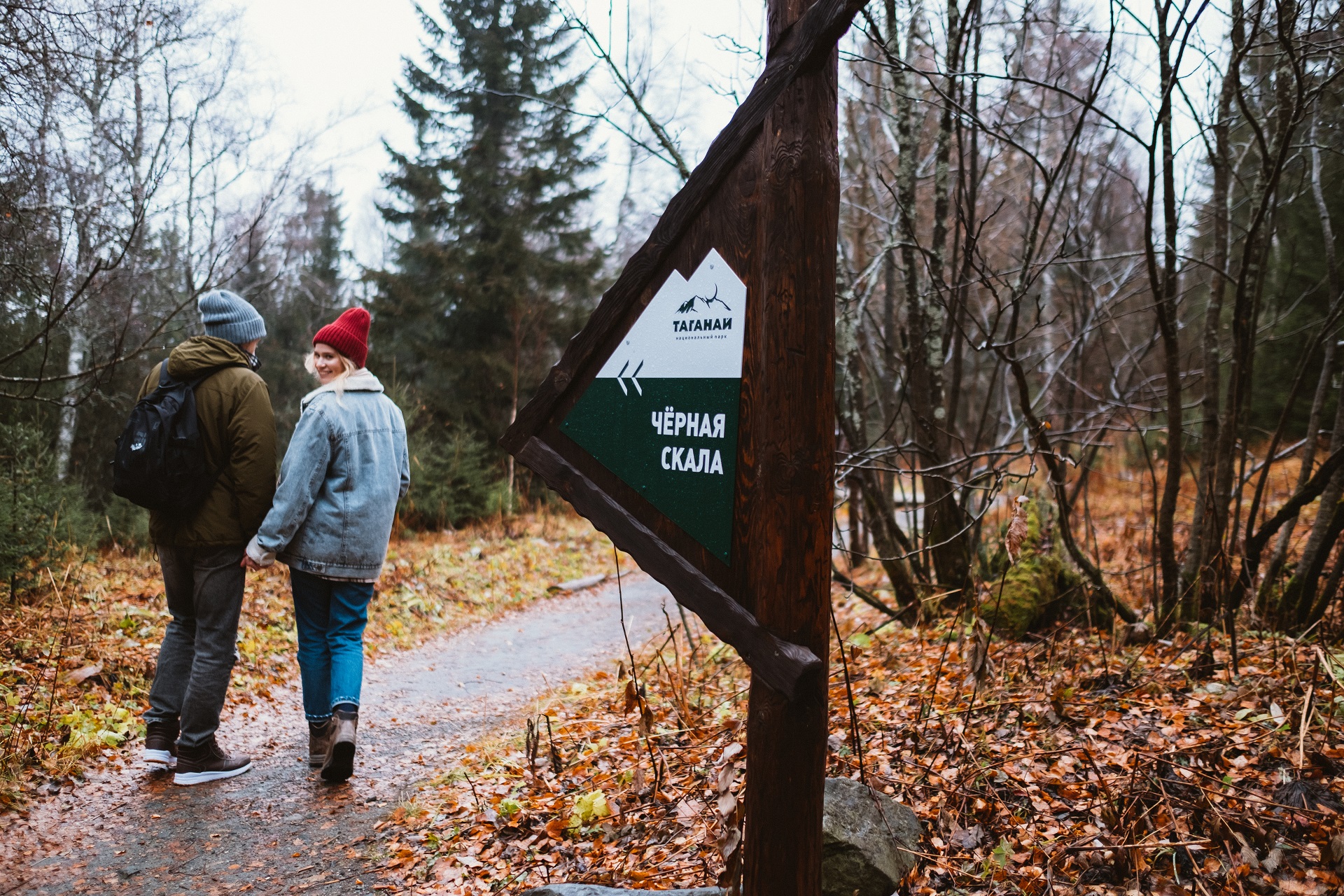 The routes through the park are categorised according to difficulty. The 'All of Taganay in 600 Steps' eco-trail to the Chernaya Skala is best for hiking novices or those short on time. The three observation decks offer panoramic views of the Ural-Tau ridge and Bolshoi Taganay ridge, along with the summits Two-headed Hill, Otkliknoy ridge, and Kruglitsa. 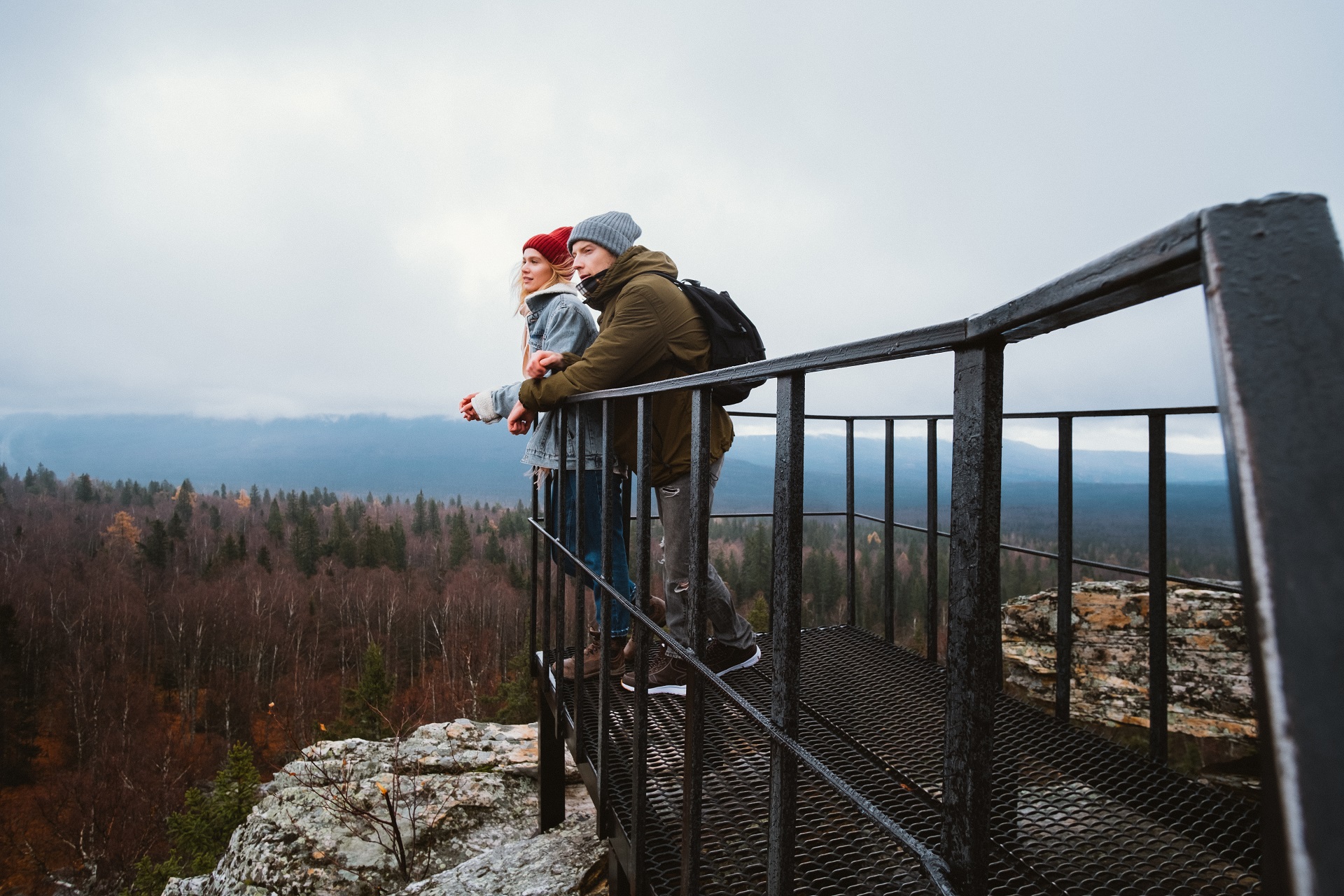 Another eco-trail, 'Where Europe Meets Asia', runs along the Semibratka tract in the southwestern part of the national park. Mountainous buttes of various shapes and sizes can be found here at the geographical border between Europe and Asia. Two of the buttes have observation decks. The 4.5-km route is not very difficult and there are no steep rises or descents. It is suitable for all tourists, no matter their hiking experience.

'To the Bolshaya Kamennaya River' and 'To the Top of the World' (The Two-headed Hill) are the two most popular day-long routes. The route 'To the Eternal Winds' (to the Dalniy Taganay) is best for experienced hikers. The trail is 65 km long and should take around 3–4 days to complete. The climb to Mt. Kruglitsa usually takes 2–3 days. 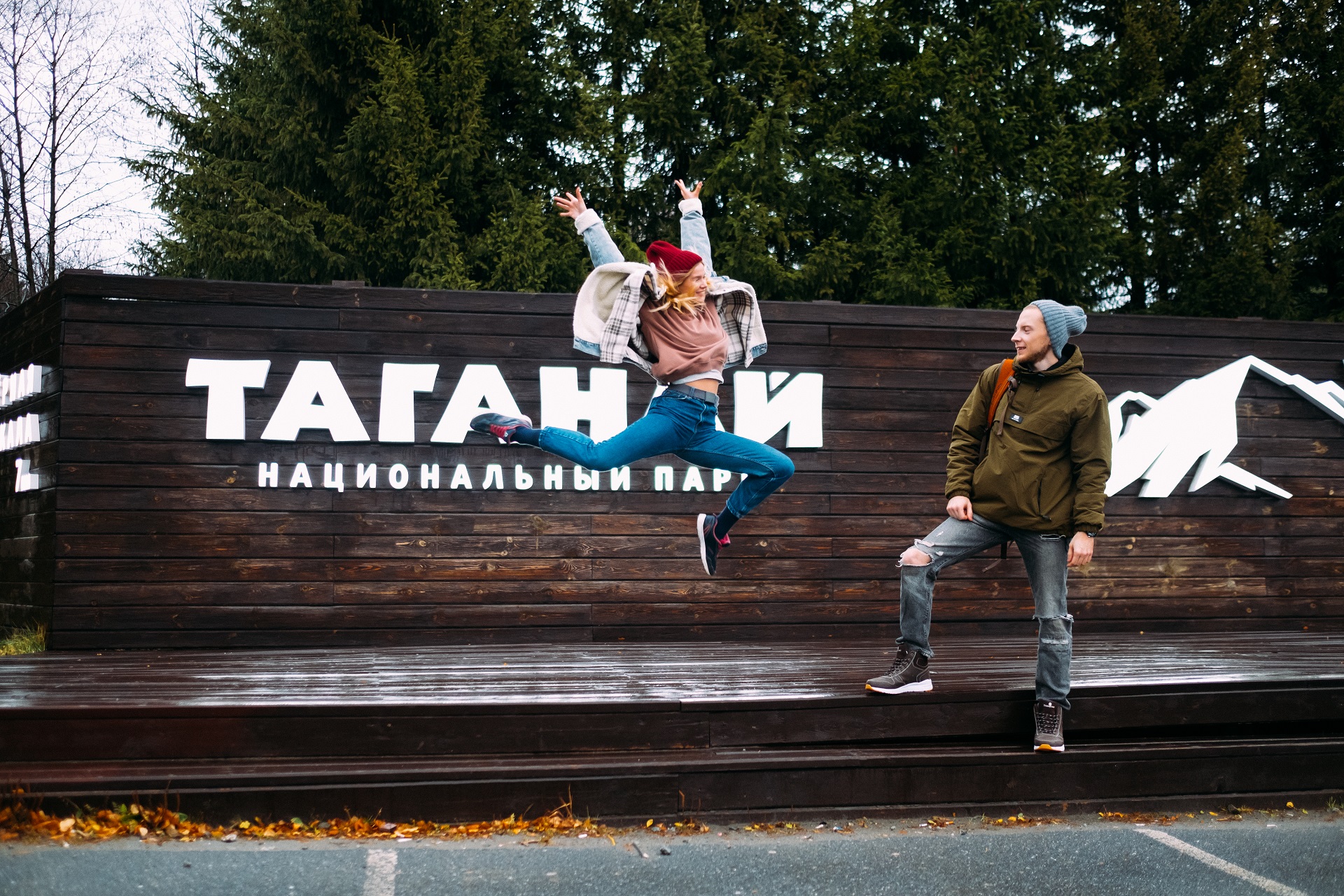 The main entrance to the national park is near the town of Zlatoust. It can be reached by car or by public transportation. Commuter trains and buses will take you to Zlatoust and a minibus will take you to the township of Pushkinskiy from there. The Central Estate is about one kilometre away from the final stop of the minibus ('Magazin Beliy Klyuch').

There are over 350 accommodation options within the park, offering everything from heated tents to guest houses for several days or a single overnight stay. Reserve your accommodation before arriving at the park. The Central Estate has seven guest houses, while the 'Meteorological station' shelter, which is the farthest from the entrance, only has one — however, that guest house does accommodate up to 16 people.

Read the rules of conduct for the national park here: https://taganay.org/black-sep