According to Forbes magazine, Kyshtym is one of the top 7 most interesting small towns in Russia, which is quite fair. This cosy small town in the Southern Urals is surrounded by a chain of low mountains and numerous picturesque lakes. Kyshtym is an example of the so-called Ural Mining and Metallurgical civilisation scattered all over the Urals. The town has a rich history, so you will have a lot to take in here.

Kyshtym ('overwintering' in the Bashkir language) got its accurate nickname, the Venice of the Urals, because it has the first fully-functioning hydraulic engineering system in Russia, built along with the local factories. The district has more than 30 natural lakes, which, through a series of canals, dams and ponds form a water supplying system. There are a dozen bridges in the town. 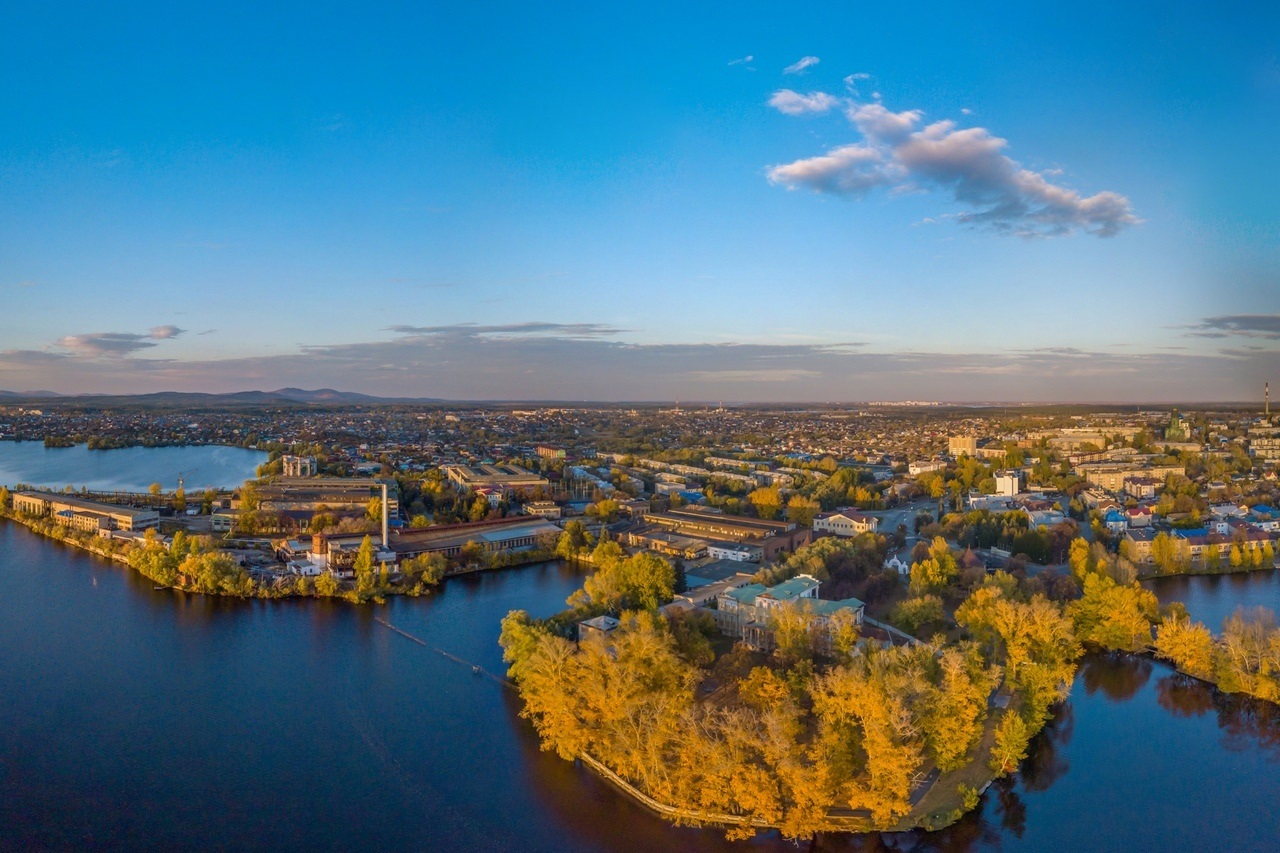 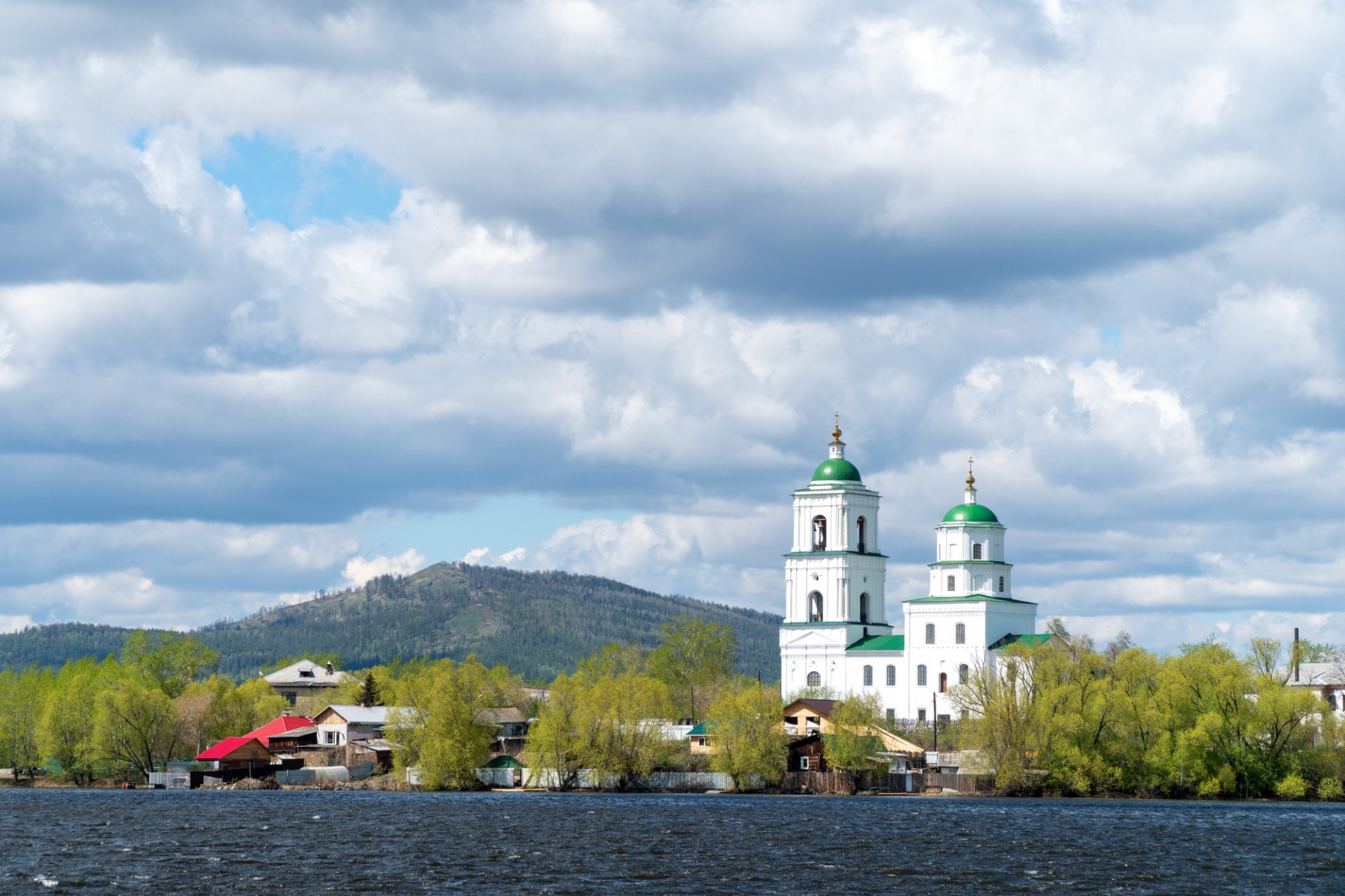 Kyshtym was founded in 1757 by Nikita Demidov. The town has two main parts, Verkhniy and Nizhniy, which were established around the Verkhnekyshtymskiy iron foundry and the Nizhnekyshtymskiy ironworks, respectively. These settlements for the plant workers used to be located several kilometres apart. Later, they were united and became a single town and the centre of the industrial district. This is the origin of Kyshtym, where the famous Demidov iron was produced 200 years ago. It was sold under the trademark 'Two Sables' and was appreciated in Russia and all over the world for its incredibly high quality.

The town's main attraction, depicted on its emblem, is the Demidov's 'White House'. The estate and the park are located on the high bank of the factory's pond. It is the only plant-manor and palace-type building left in the Southern Urals. Today the mansion hosts a festival that includes the Demidov costume ball, an outdoor cinema in summer, holiday celebrations, exhibitions and just a chance for a pleasant stroll. 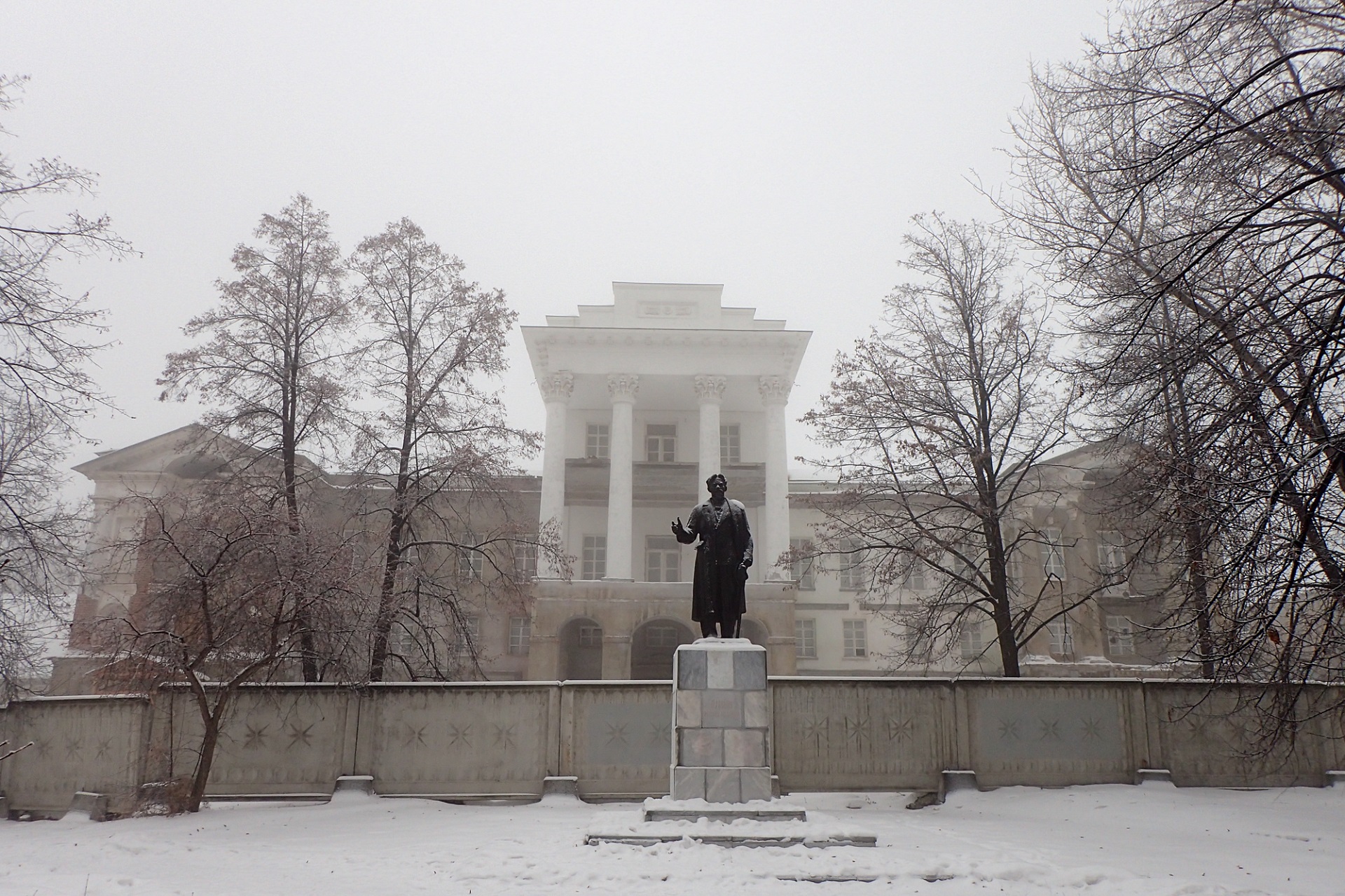 The White House at Demidov’s Estate Photo by Maxim Shveikin

A string of bridges will lead you from the estate to a small island. There, you can find the Pushkin Public Garden, Druzhinin House with the Strannik tourist сentre, and the Cathedral of the Descent of the Holy Spirit to the Apostles. The cathedral is the oldest building in Kyshtym and the first house of worship in the workers' settlement. The locals called it 'the Old Church'. Druzhinin House is an old wooden mansion with carved mouldings. The mansion was built in the 19th century for Grigoriy Druzhinin, co-owner of the factories in the Kyshtym industrial district. The next attraction, the Public Garden, was reconstructed and has become a modern outdoor recreational centre.

Narodnyy Dom is situated on Teatralnaya street. This picturesque pink building sitting on the shore of the factory's pond got this name when it opened in 1903. It has been the city's Cultural and Drama Centre for over a hundred years and is home to all the local performance groups. 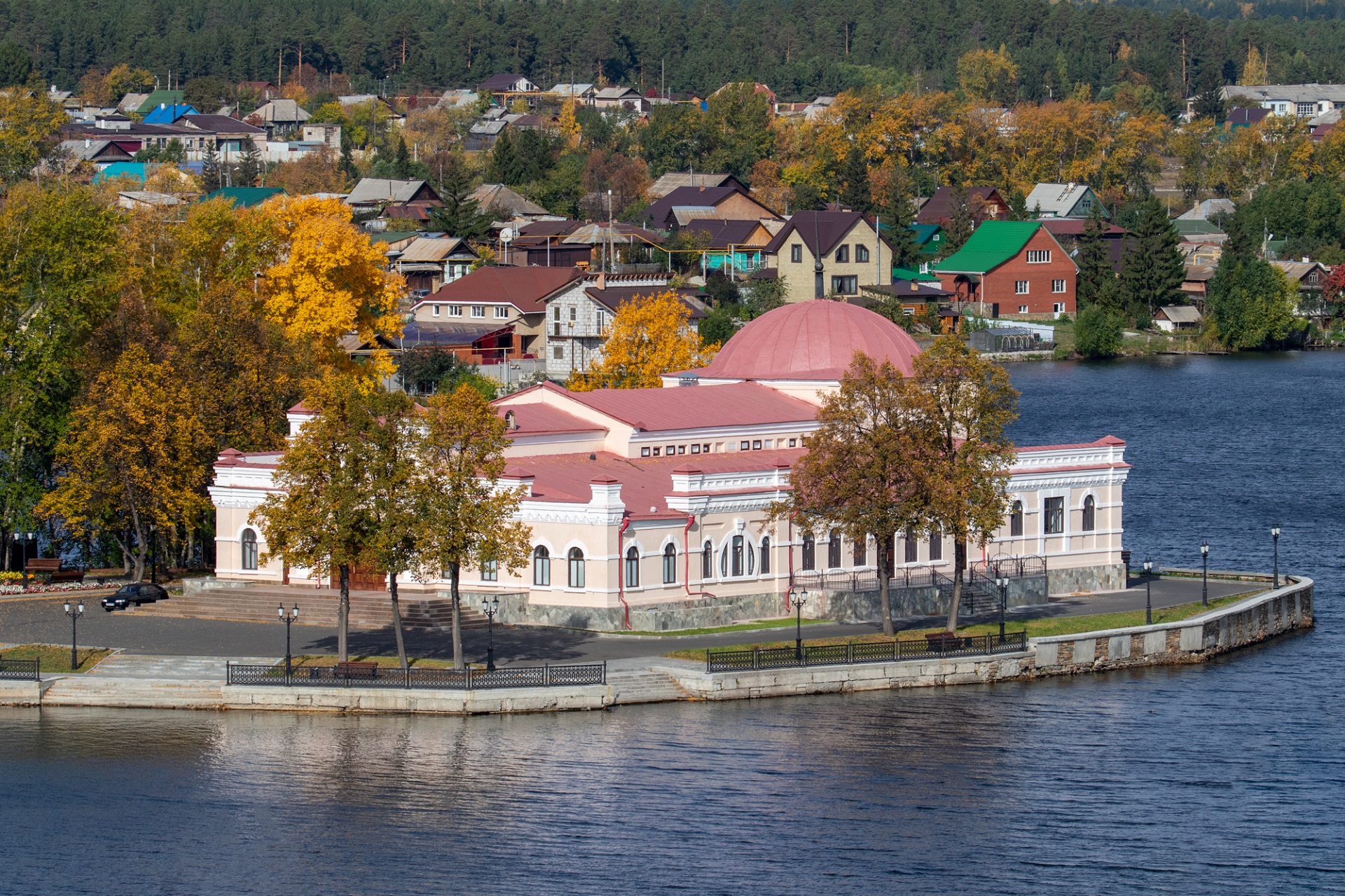 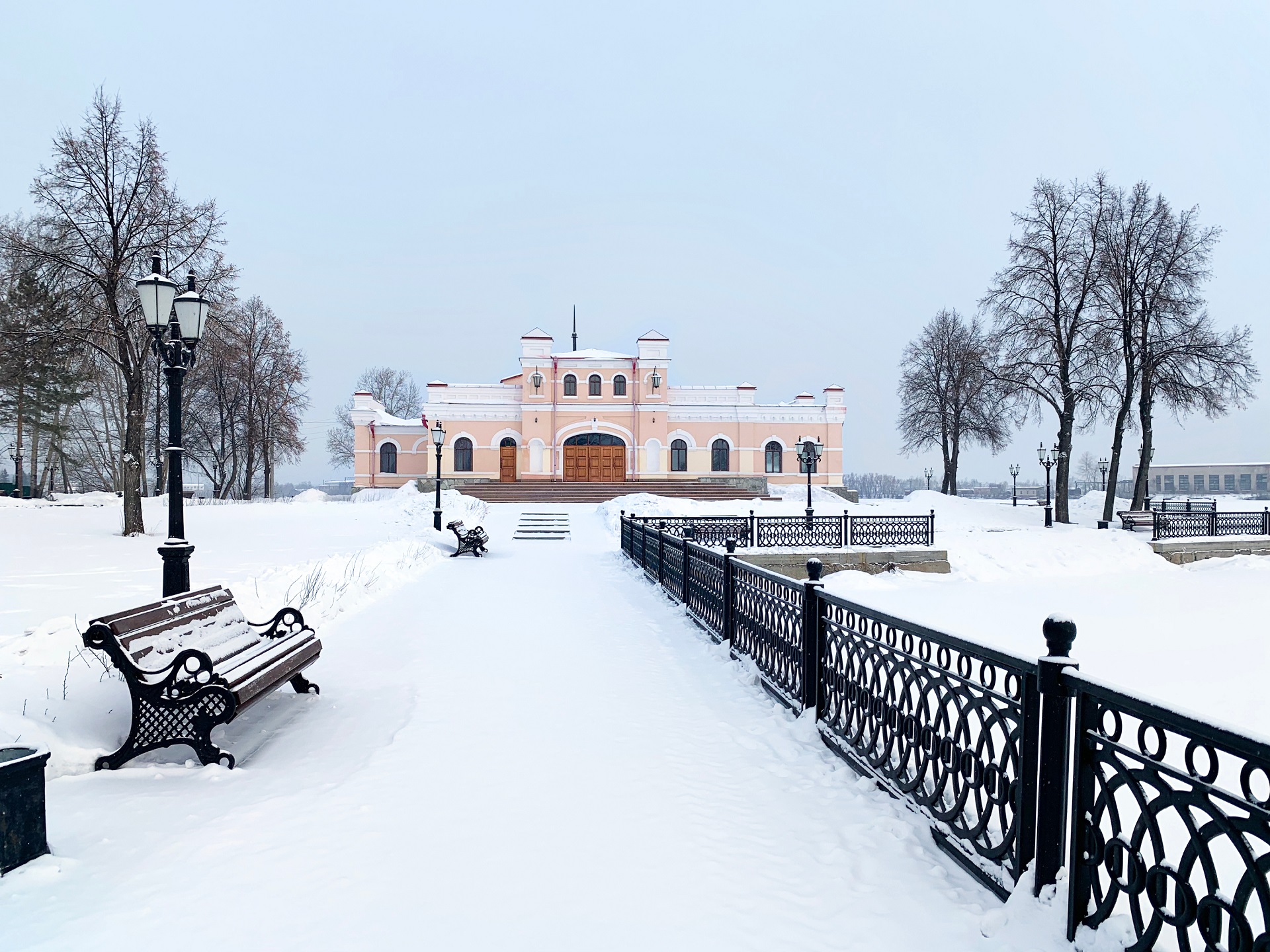 You can also take a walk along the new promenade and easily get down to the water. The promenade has an iron fence, lights and benches.

After seeing the sights in Kyshtym, nature enthusiasts can go into the woods and follow the nature trail to one of the peaks seen from the town's centre, Sugomak or Yegoza. 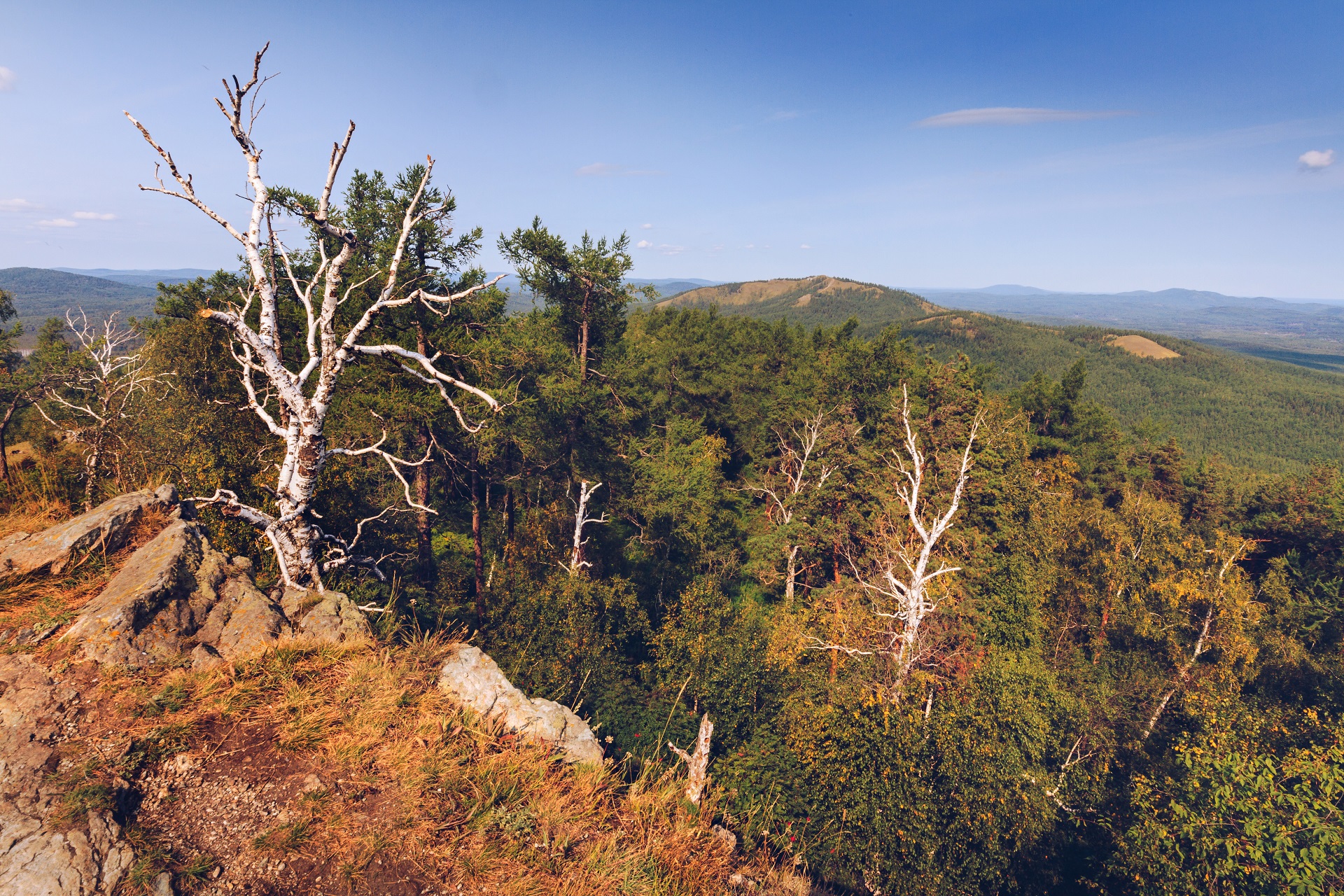 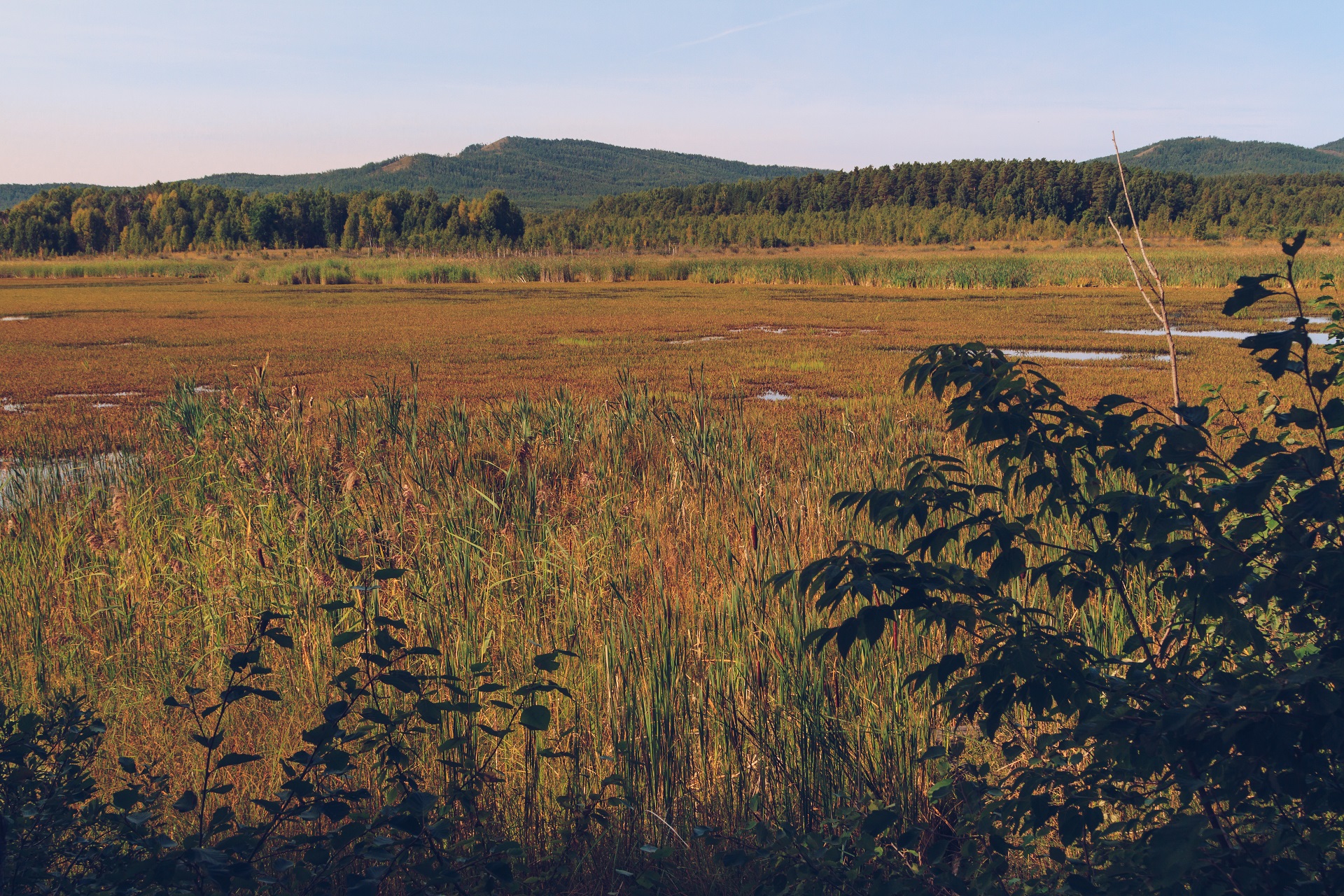 Sugomak natural region embraces its namesake mountain as well as the cave called Sugomak and Lake Sugomak, which are protected natural sites in Chelyabinsk Region. Mount Yegoza is just across from it. In winter Yegoza is a ski centre, and in the summertime it attracts mountain bikers and moto-crossers. 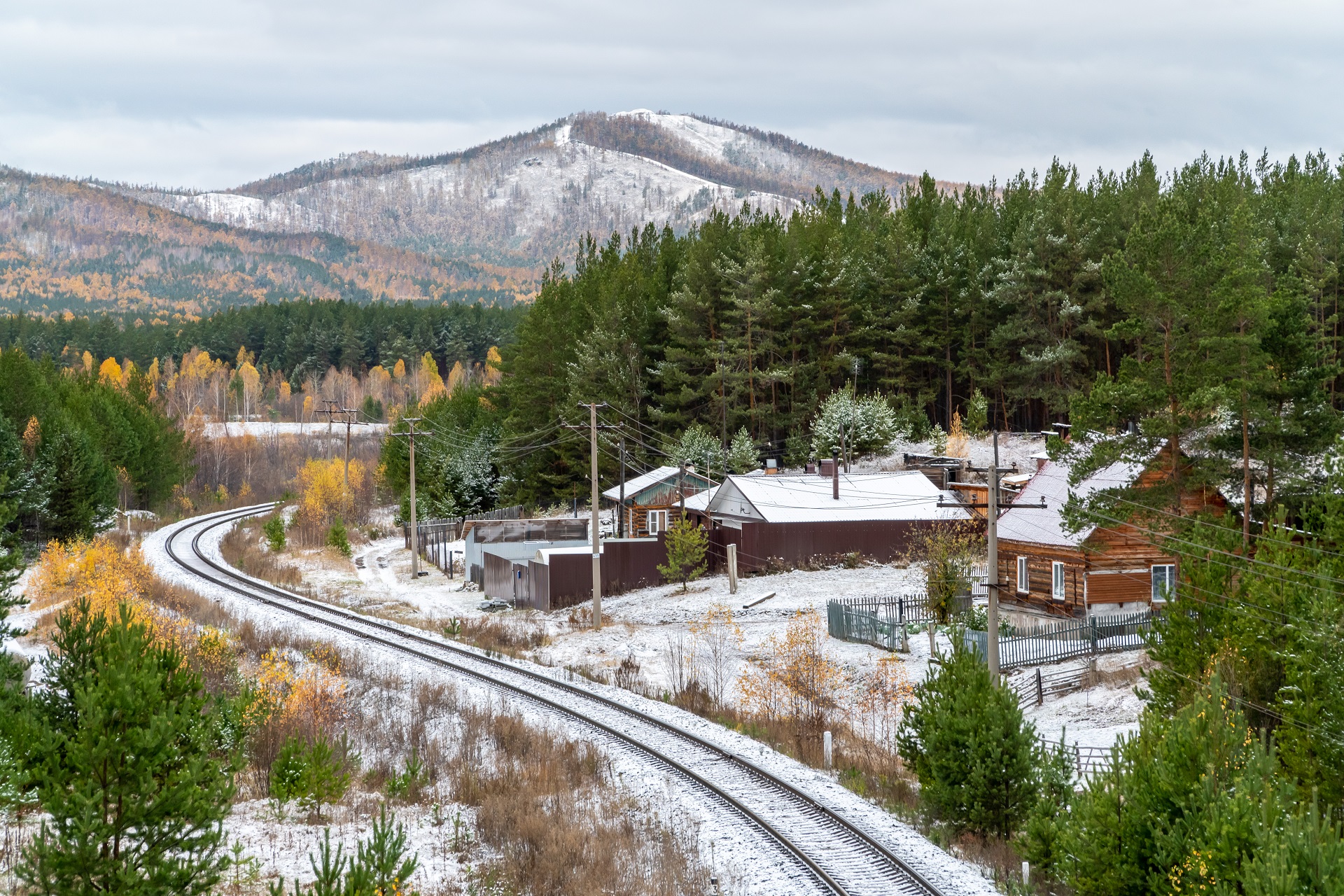 In the village of Slyudorudnik there is an ecological and geological trail and a new tourist route near the mine shafts. The place reverberates with the history of 19th-century metal mining. You will see gold mines and quarries shimmering with mica. In addition to the Kaolin and Tayginskiy Quarries, Lake Uvildy, the border between Europe and Asia and the Dragon Wing rock attract plenty of tourists. 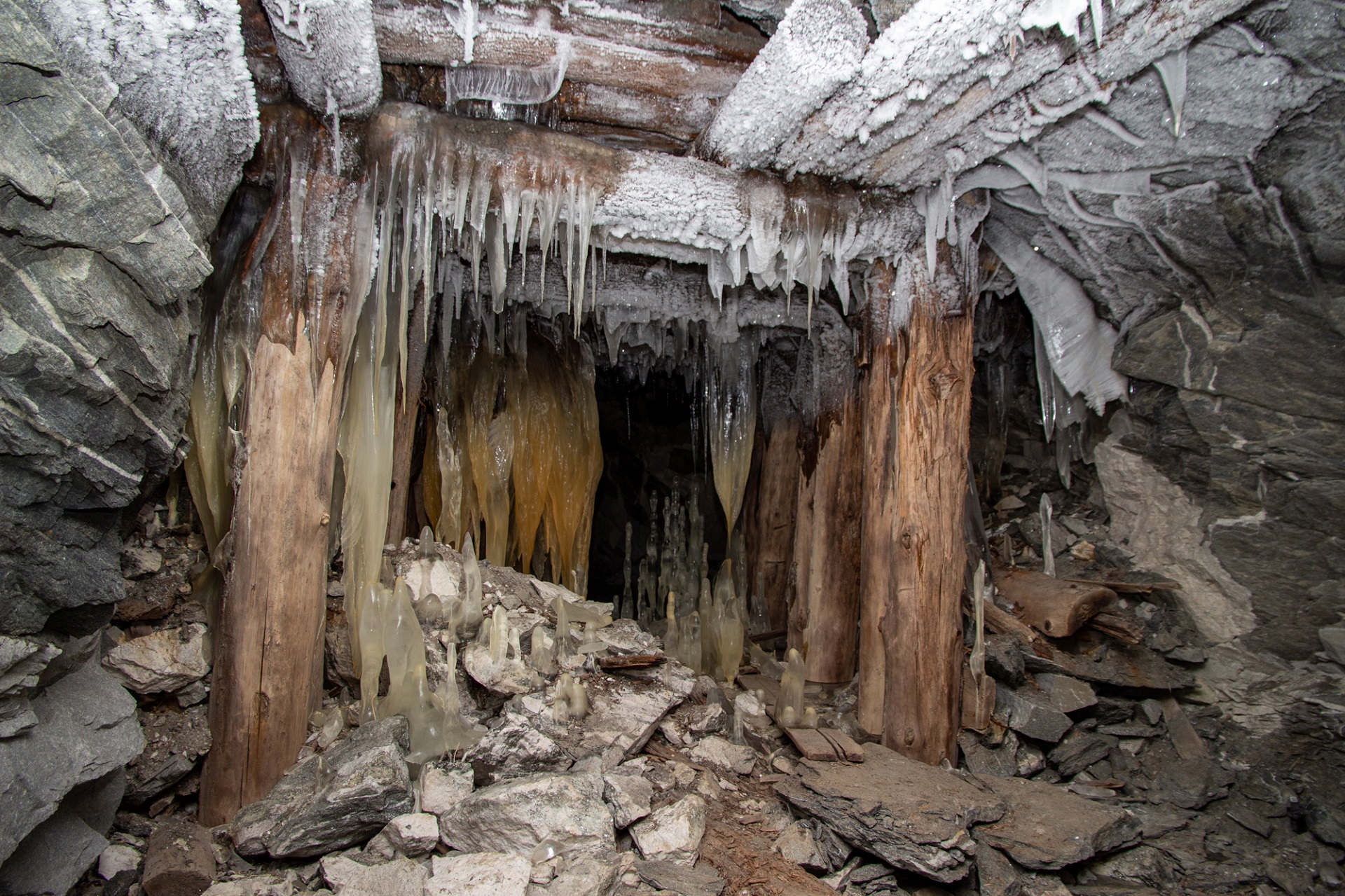 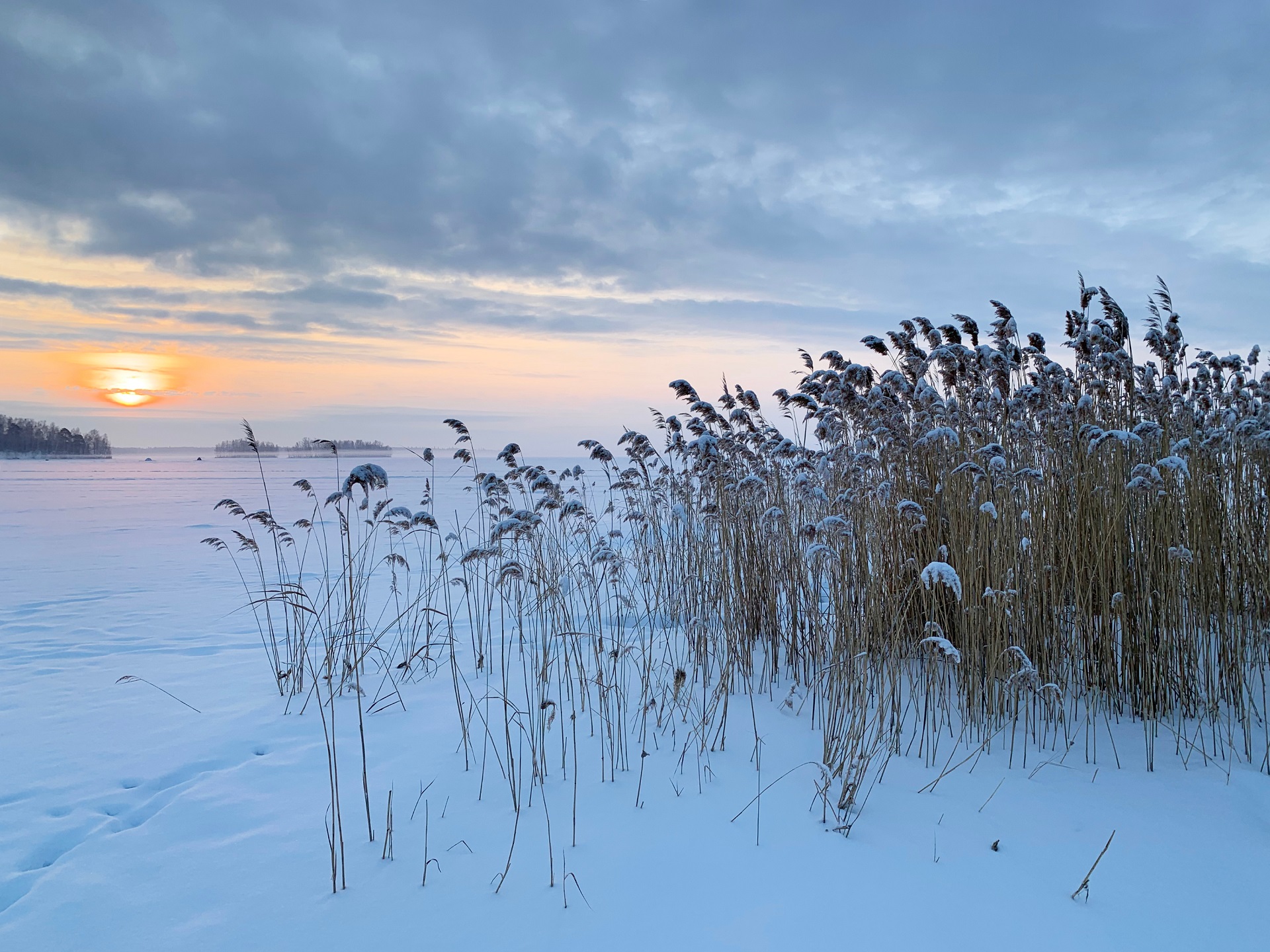 At the sports tourism centre Provintsia you can visit an adventure park and stable yard, ride mountain bikes or take a walk in the woods. In winter you can rent ski or inner tubes for tubing.

Skala climbing park (103B Internatsionala St) offers thrills both for children and grown-ups. The climbing park has all the necessary equipment and a team of professional instructors. Outdoor climbing is also available.

Yegoza Bike park, located in the village of Kanifolnyy is the place to be for those who love adventure, mountains, bikes and enjoy being around active people. 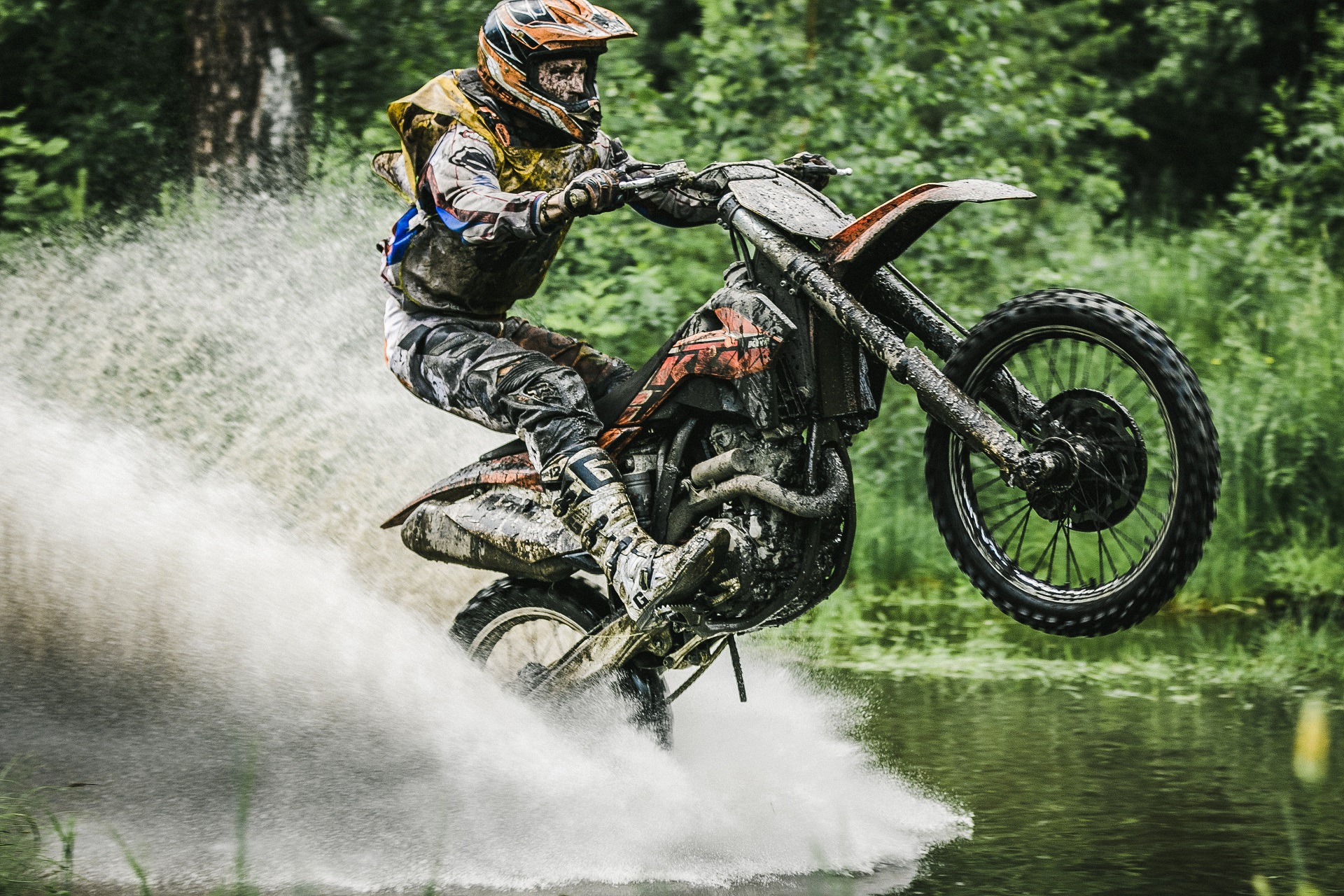 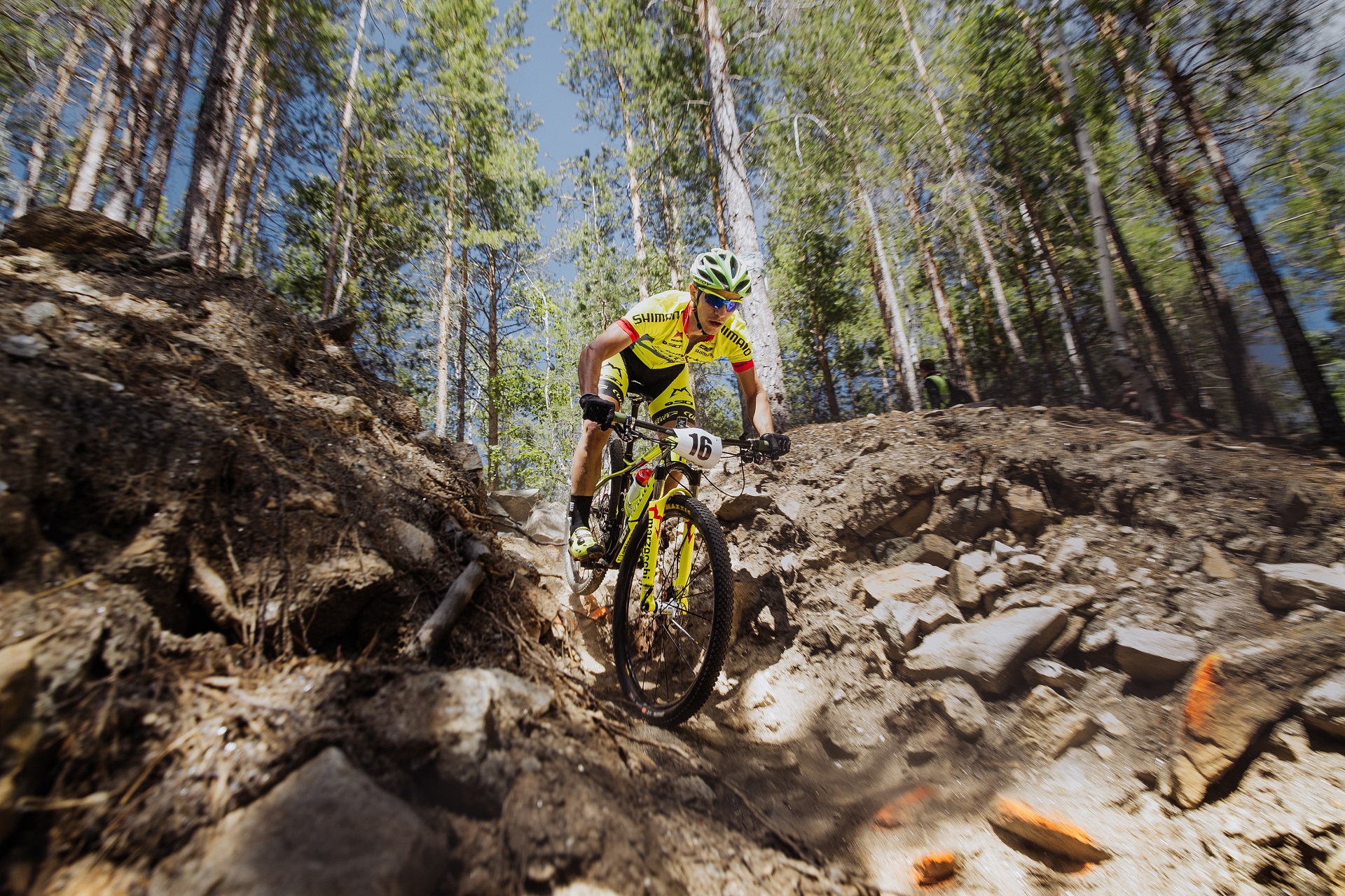 You can get to Tikhoye Zimovye by bus, train or car. It is 98 km from Chelyabinsk.

The cost of accommodation in the town's hotels starts from RUB 1,600 per night. You can get a good, comfortable rest in the hotels Rodnik (137A Karla Libknekhta St), Rassvet (2 Kooperativnya St), Akropol (2B Vtoraya Yuzhnaya St), FSK (60 Malysheva St), Bilyard (2 Frunze St) and Kvarz (50 Lenina St).

The easiest way to get to Kyshtym from Chelyabinsk is by car. Take route M-5 through the villages of Dolgoderevenskoye, Argayash and Kuznetskoye. Travel time is a little over 1 hour.

The railway station shares the building with the bus station. You can get to Kyshtym from Chelyabinsk by any of the many daily buses, starting from 6am. A bus ticket will cost you RUB 300. Travel time is about 1.5 hours.

Kyshtym railway station is located on 14 Vokzalnaya St. A ticket for a commuter train will cost you approximately RUB 240. The commuter train runs twice a day, in the morning and in the evening. You can also take a long-distance train. Travel time: 1.5 to 2 hours.