On a quest for fog and taiga smell

There is something indescribably warm and genuine about evenings around the campfire, sipping tea with fragrant herbs, singing to the guitar, and revelling in the vast starry sky above your head. This short trek with one overnight stay, quite rich in scenery, will be perfect if you aren't yet ready for long routes but hiking romance calls to you.

The distance our heroes, Zhenya, Sasha, and Semyon, must cover in two days is only 20 kilometers. No matter how easy the route appears, though, you still must be prepared for it. Consider wearing hiking boots with sturdy tops and non-slip soles if you want to be more comfortable. Don't forget your trekking poles and a jacket or waterproof windbreaker, just in case. 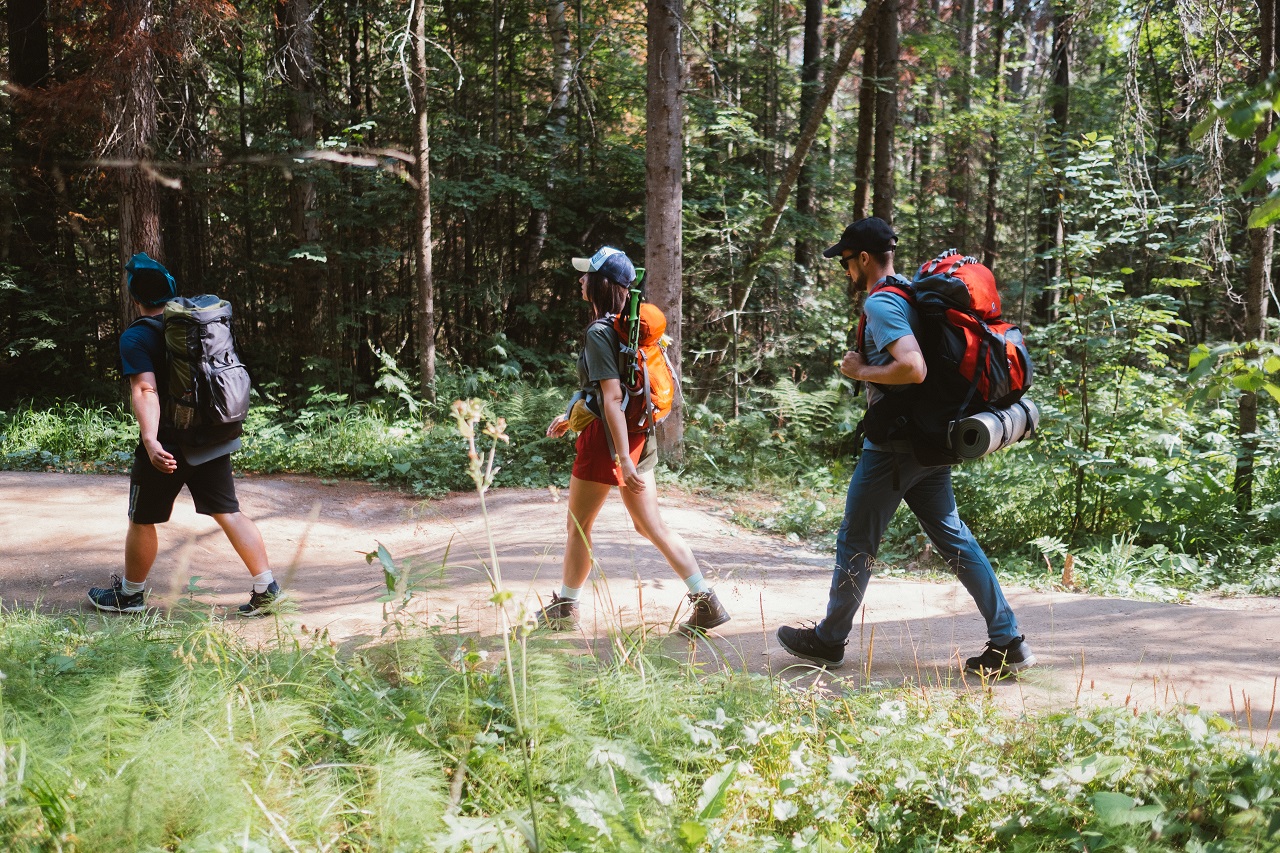 "We frequently travel to Taganay. However, every trip there still yields a discovery. We see the awakening of rivers and delicate primroses in the spring, the lush greenery and stunning stone streams in the summer, the gold of woods in the fall, and snowy summits in the winter. If we go with friends, we typically pitch our tent out on a campsite in the wild, even if with some degree of improvement, rather than at a full-fledged camping area. Such wild days out resonate with us better, after all! You may tell tourist tales, sing songs, prepare meals over a campfire, and just unwind away from the city buzz." 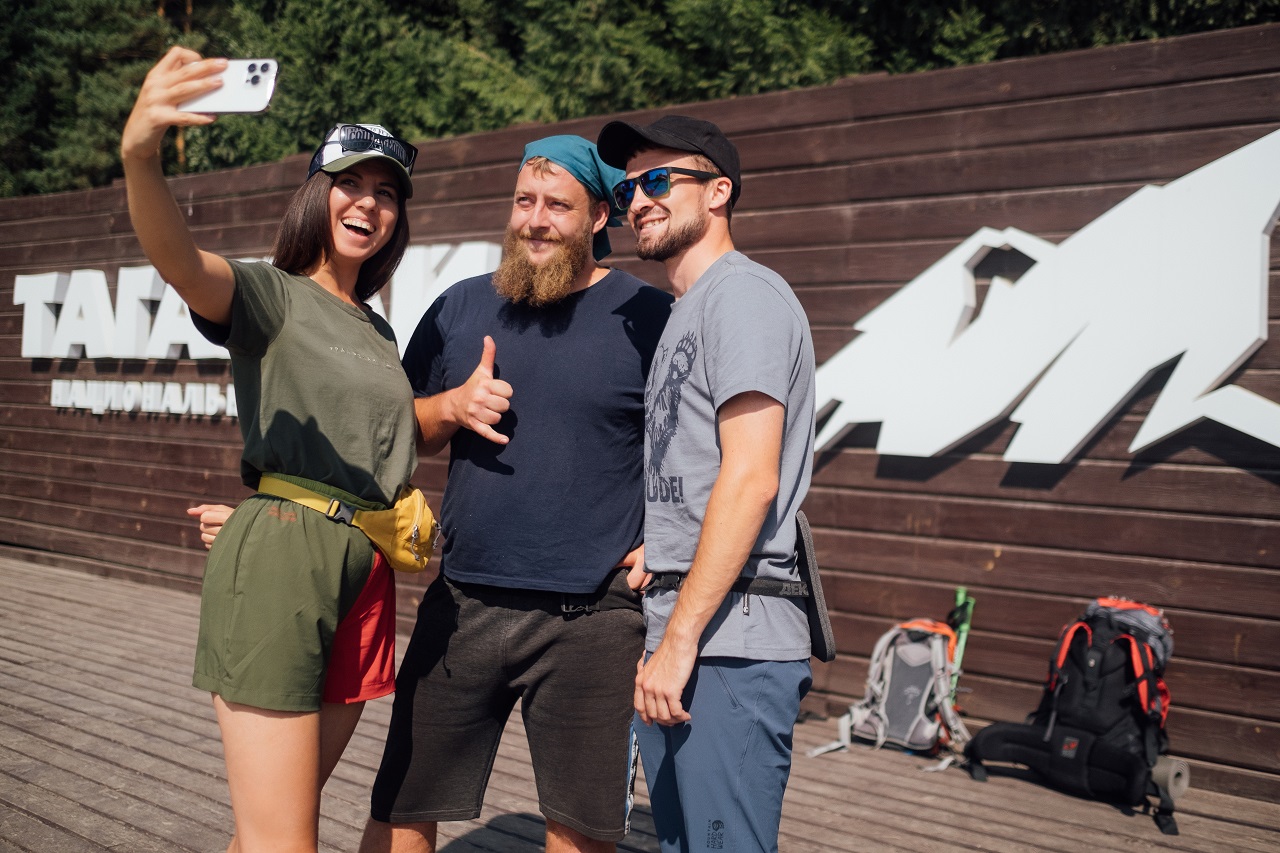 The route begins at the Taganay National Park's Central Estate , where our heroes purchased a visitation pass, obtained a map of the park, and took their first group selfie.

One of the most peculiar rivers in the world, Kamennaya, will be their trek's first draw. The biggest boulder placer in the world, it appeared on the grounds of the present-day Taganay National Park many thousand years ago. 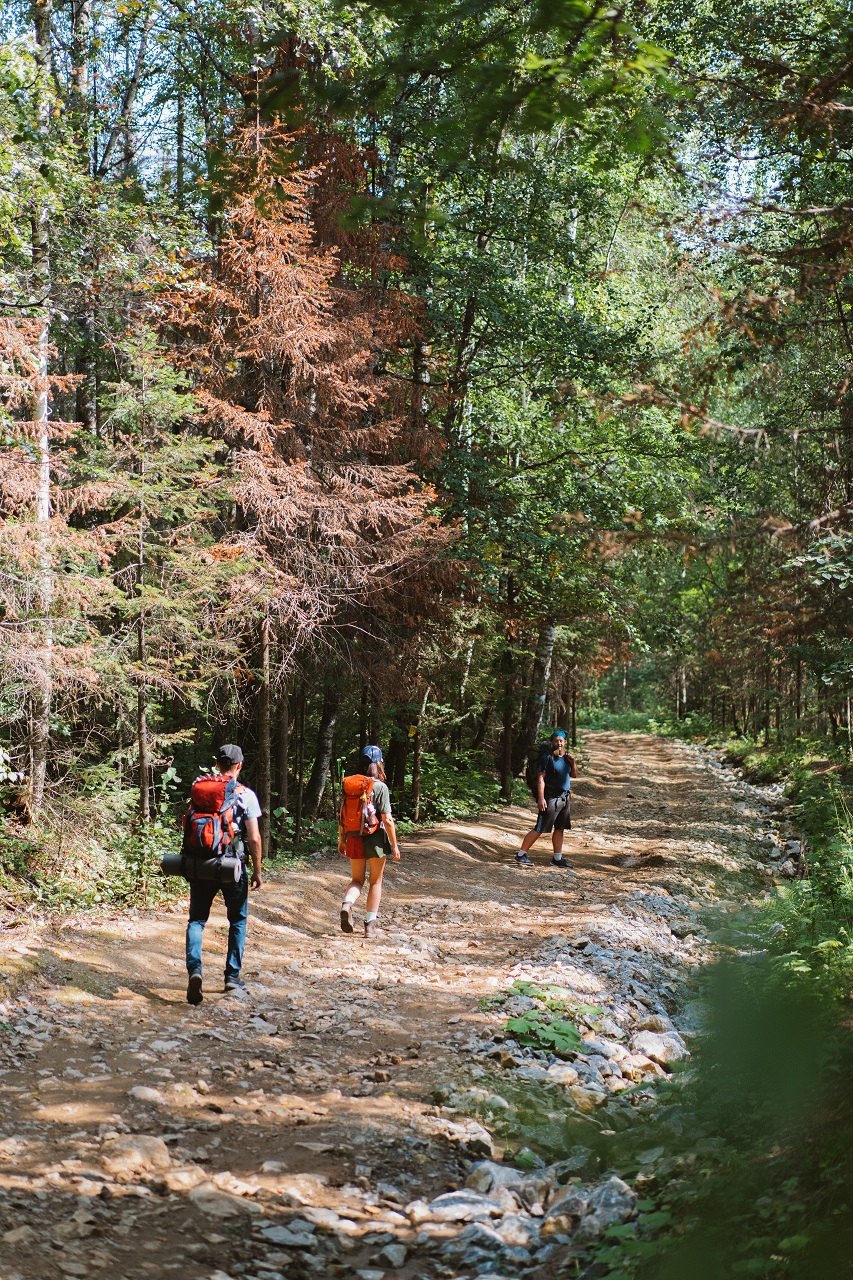 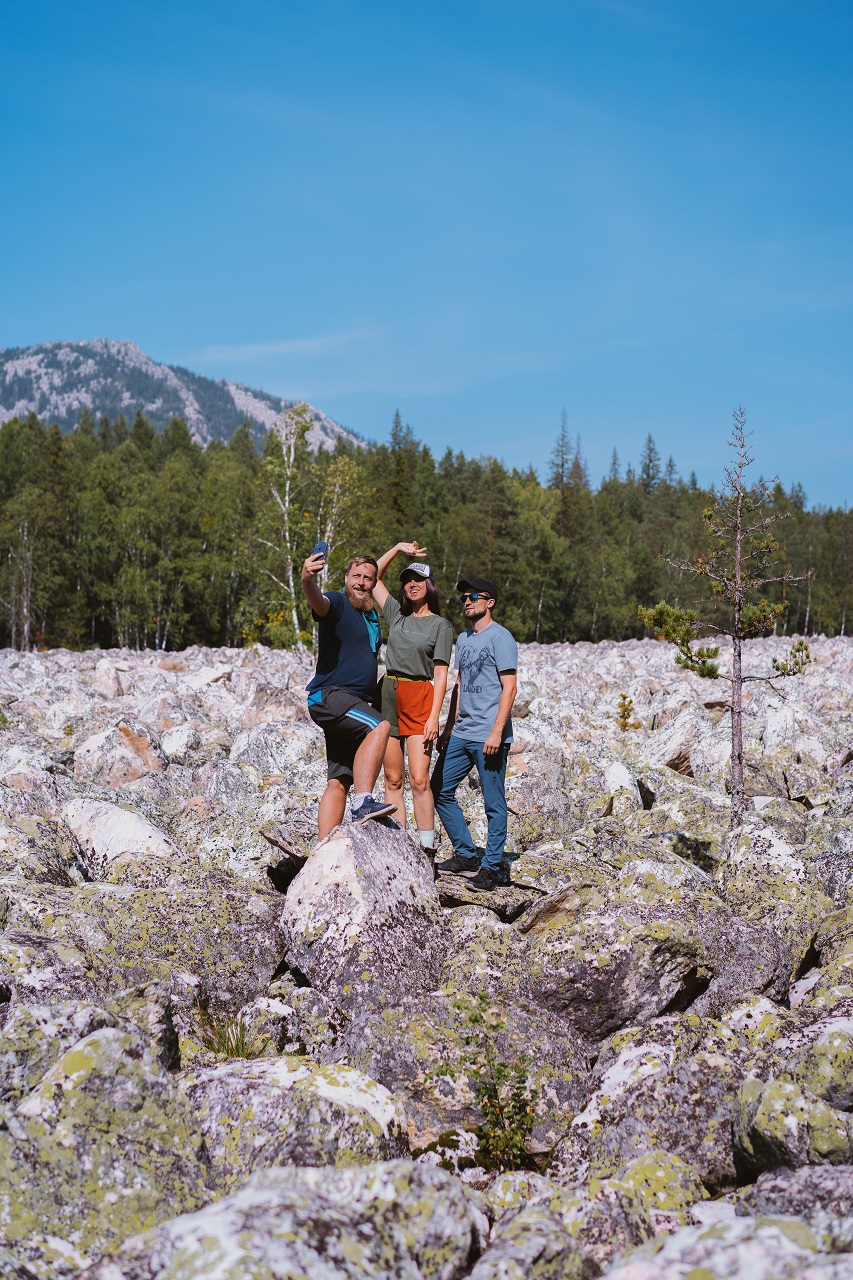 A brand-new eco-route, slightly over five kilometers long, leads from the Central Estate to the Bolshaya Kamennaya River. We take directions from the signage, and the Vesyoliy Klyuch campsite serves as our marker.

The Bolshoy and Sredniy Taganay ridges can be admired from the observation deck on our heroes' path, and there is also a charming suspended crossing on the river. 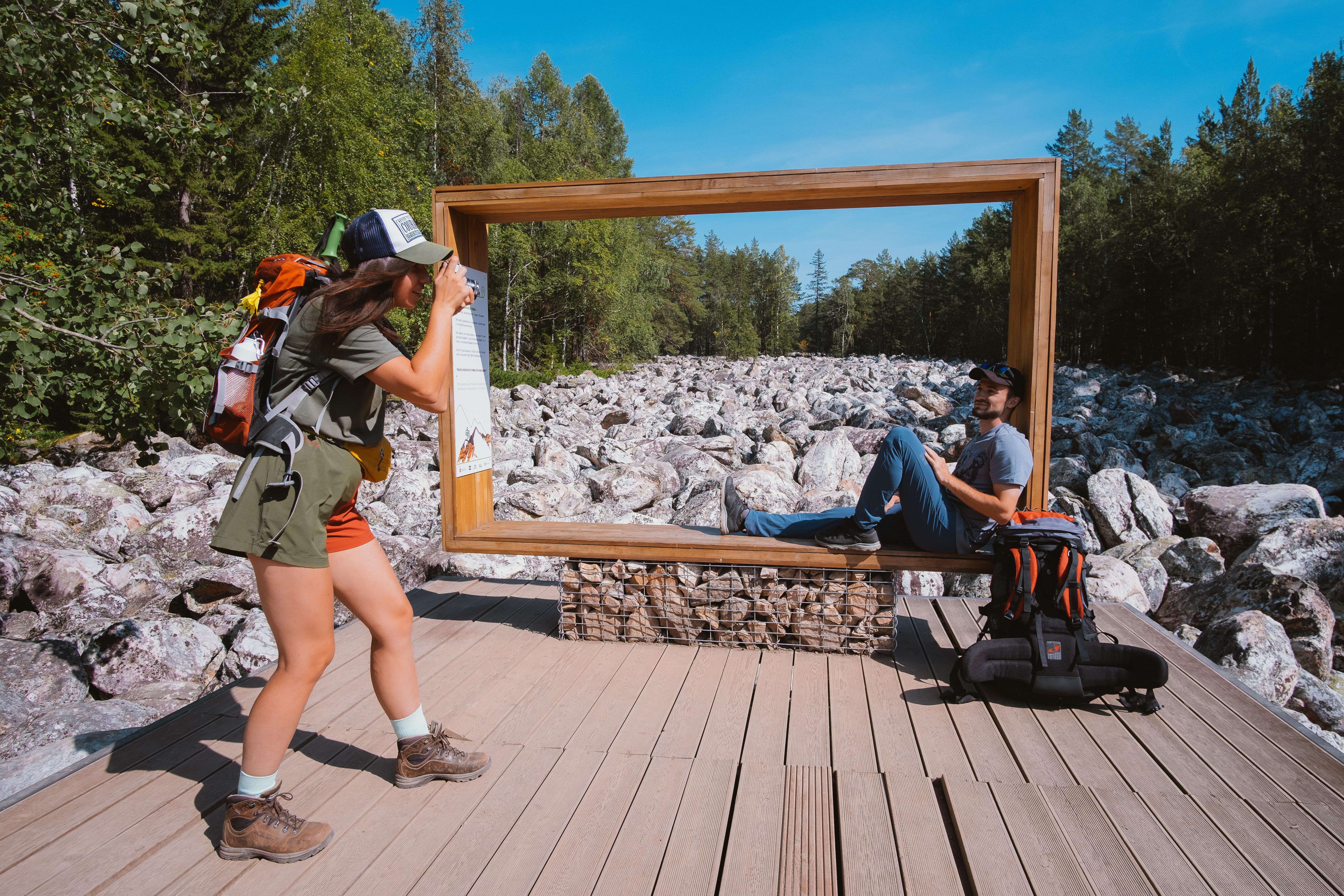 After an hour of vigorous trekking, the guys arrived at the Vesyoliy Klyuch campsite, which provides the greatest panorama of the Bolshaya Kamennaya River and the Dvuglavaya Hill. There is an unique metal podium built here for those who are hesitant to hop over stones.

"When you have such views behind you, then no mountains will stop you!"

The Bolshaya Kamennaya River is located between the Bolshoy and Sredniy Taganay ridges. Each stone block in the river is around ten tonnes in weight. The river has a 6 kilometer length and can widen to 200–500 meters in some areas. The stones are half-covered by dirt, down to a depth reaching six metres. 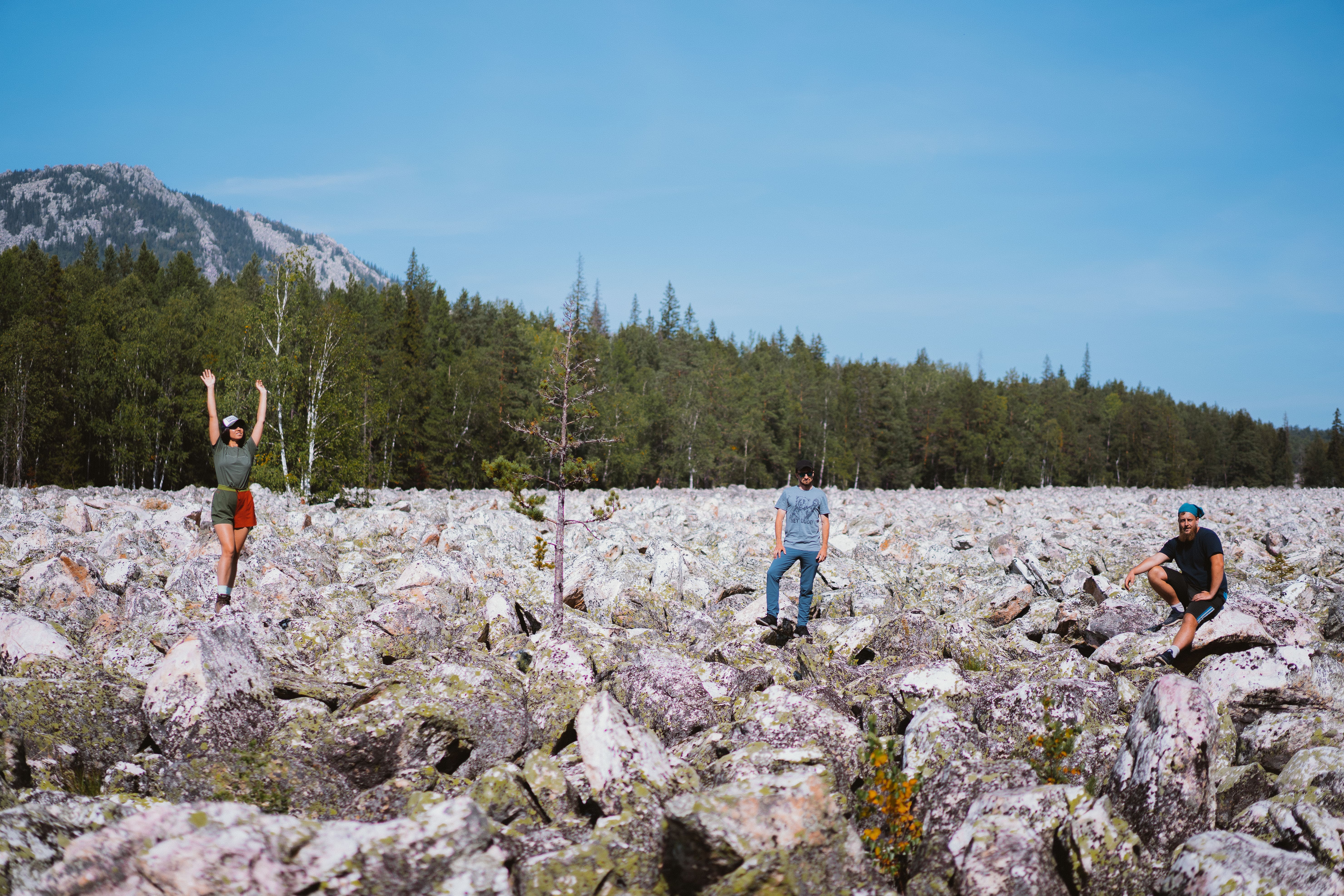 The river came to be during an ancient glacier period, when mountain ranges cracked and crumbled into enormous rocks, later shaped into spheres by meltwater. The river is made up of aventurine, referred to locally by as "taganayite" or "zlatoiskr." 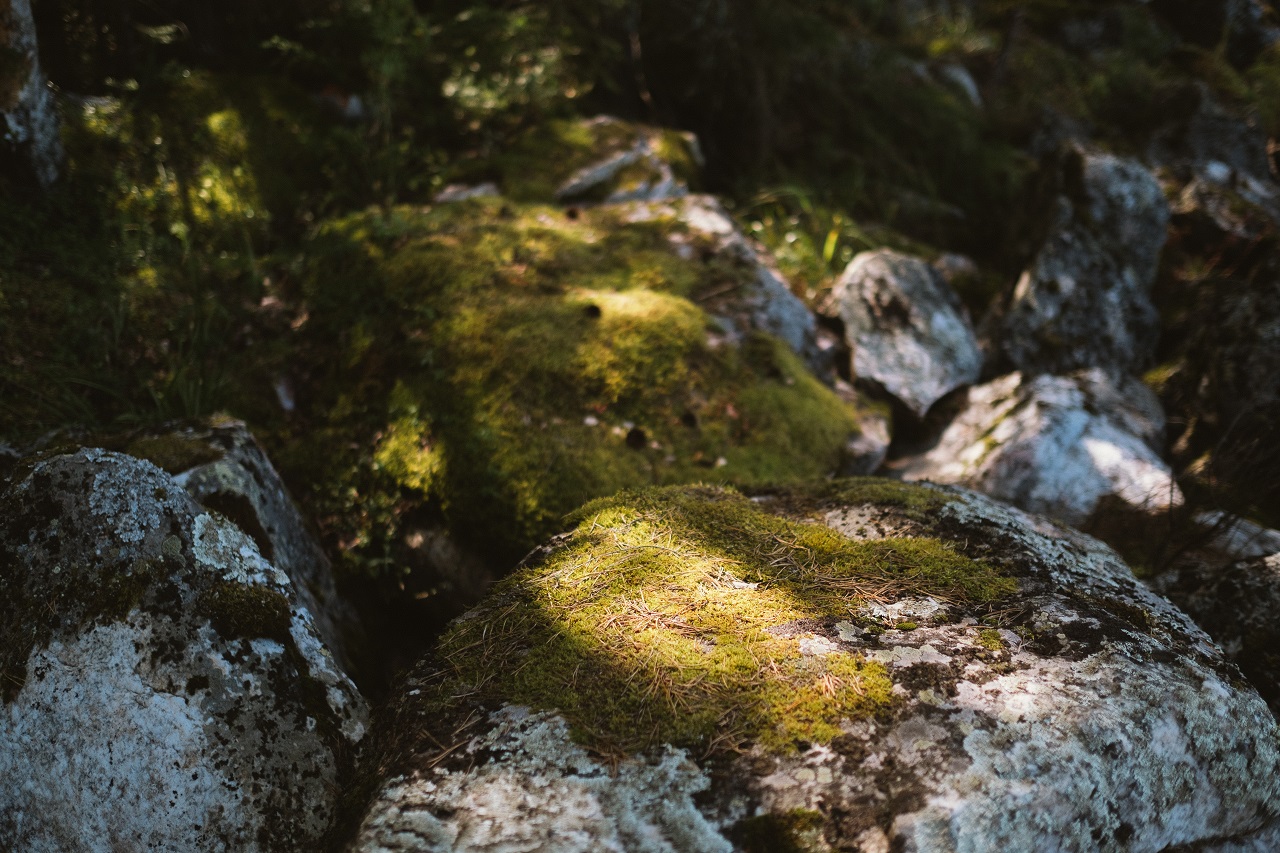 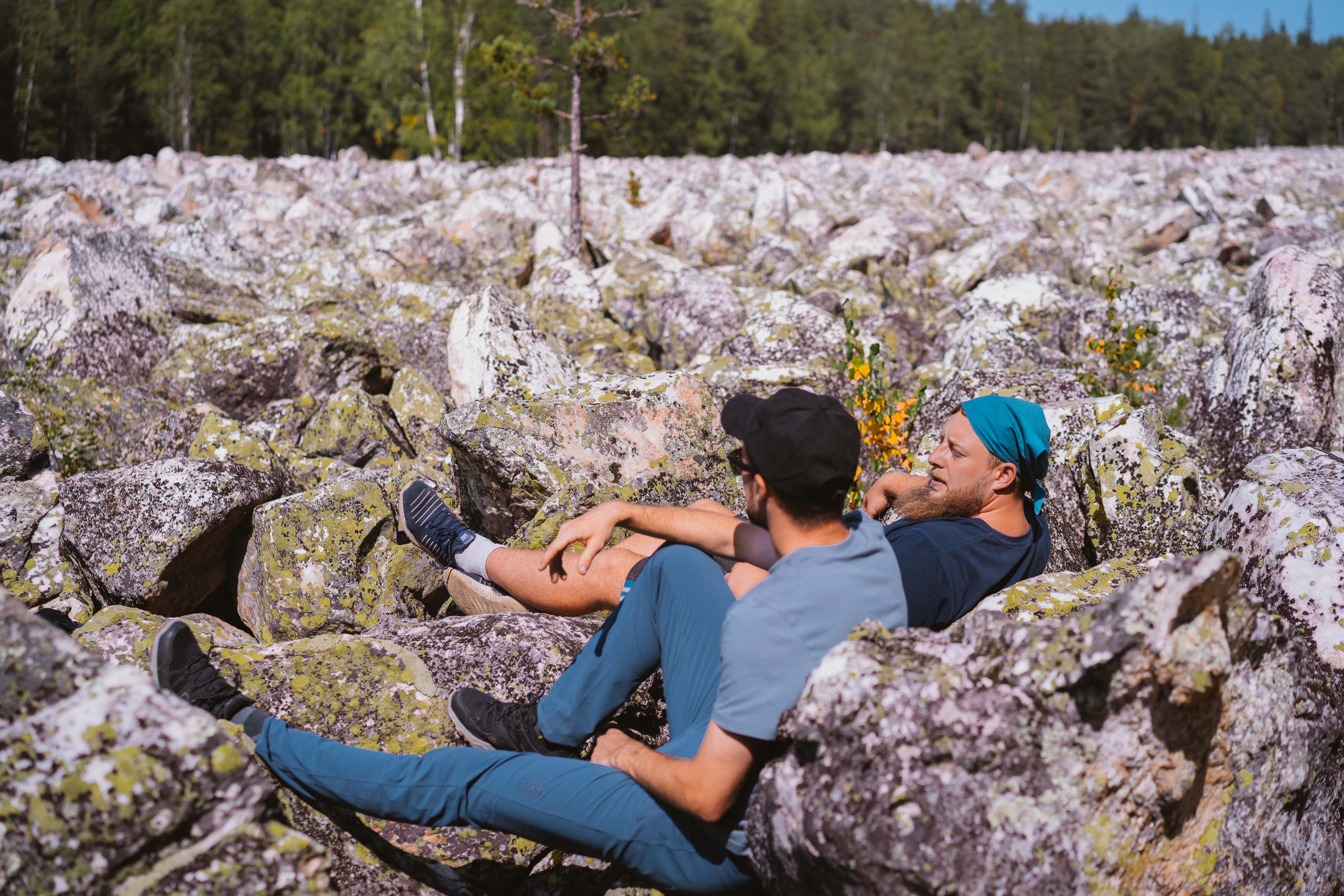 The stony river has no vegetation, lichens being the one exception.

After taking a break and admiring the scenery along the Bolshaya Kamennaya River, our tourists are once again on their way. The Dvuglavaya Hill, one of Taganay National Park's most approachable summits, is their trek's primary objective. 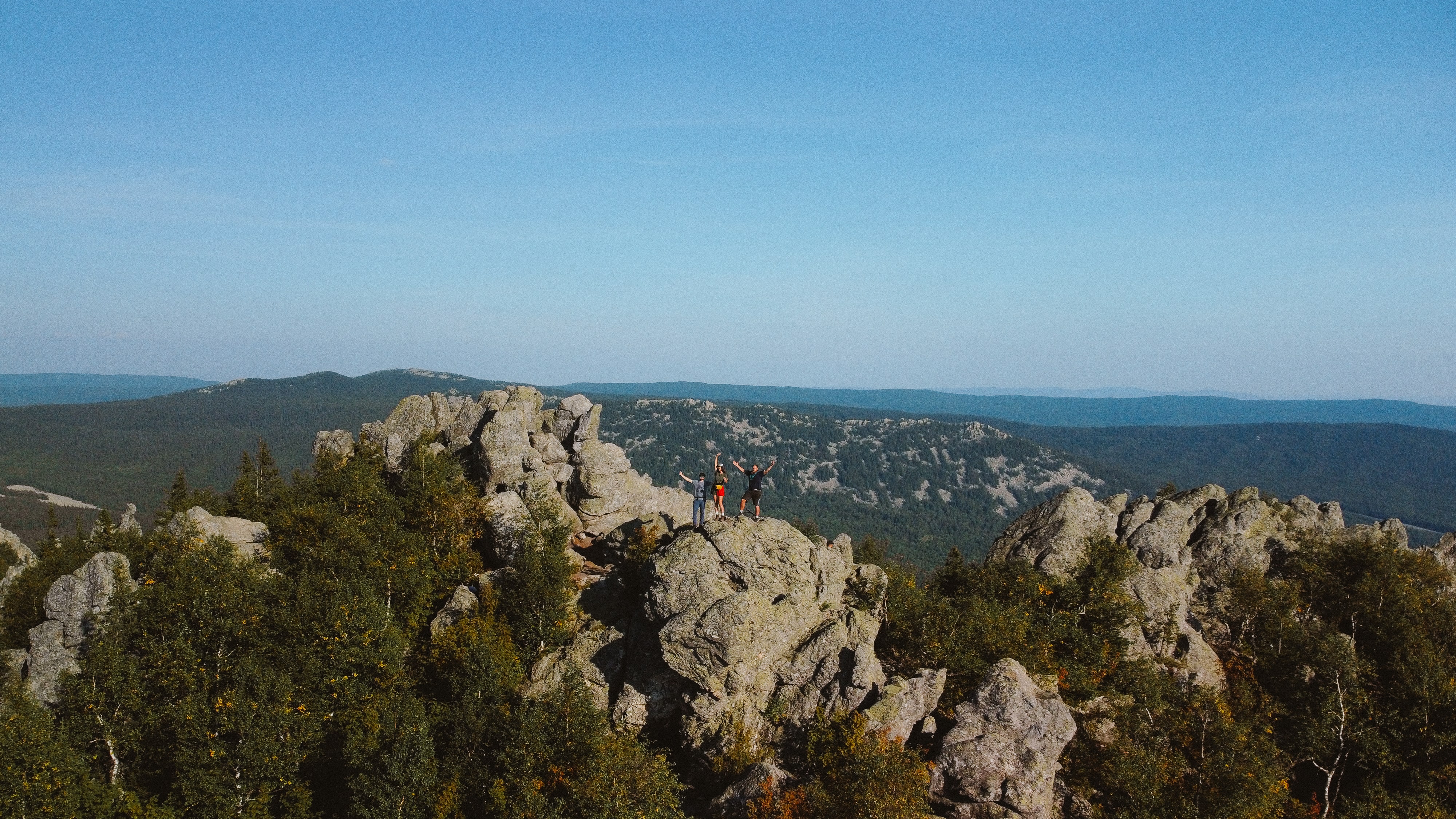 They will have to go back along the trail to the Iron Bridge, then turn at the sign and go to the intersection with the Upper Route. A long ascent will take them to the White Well, a mountain spring with crystal clear water. There, they'll wash up, get water, and rehydrate themselves. 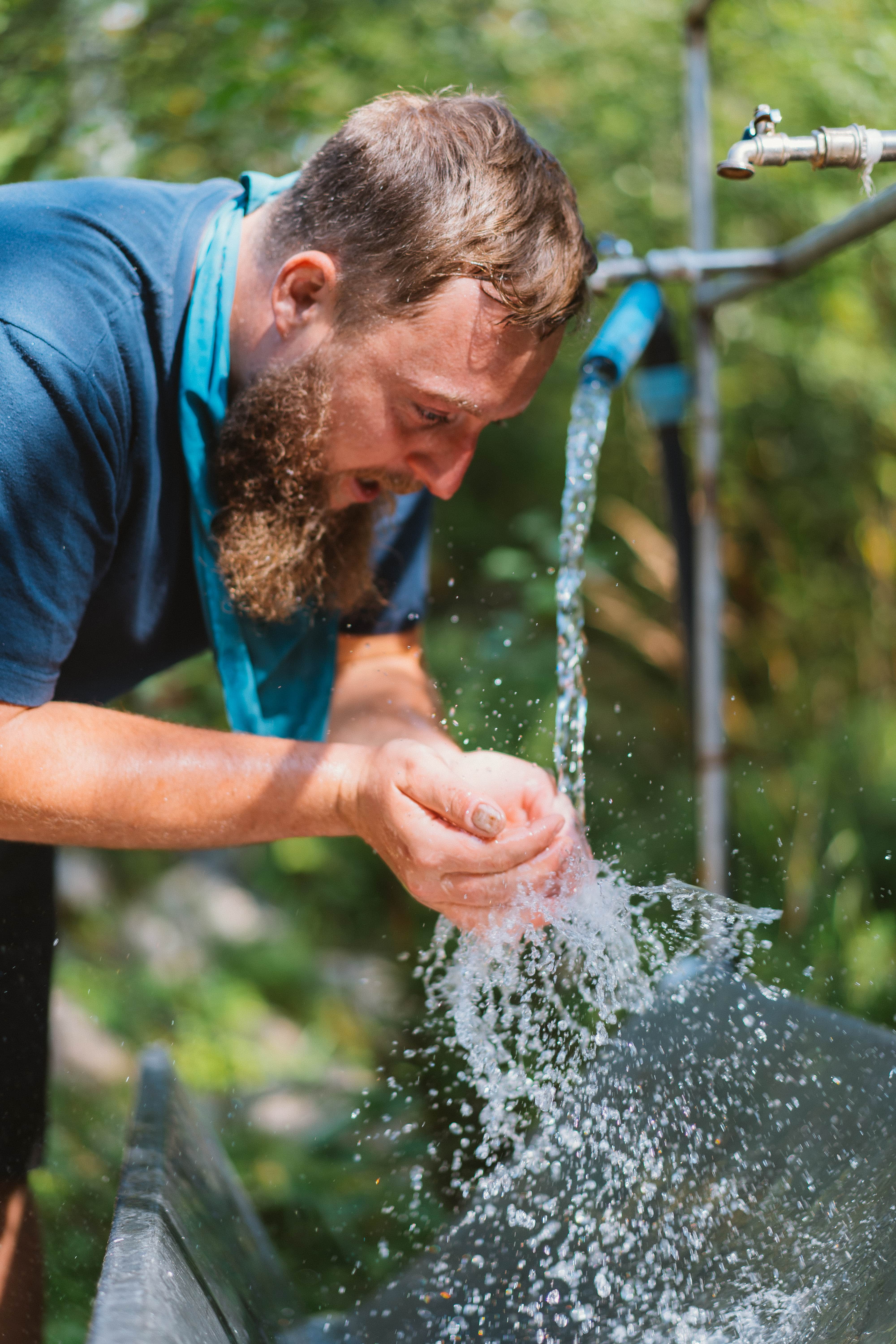 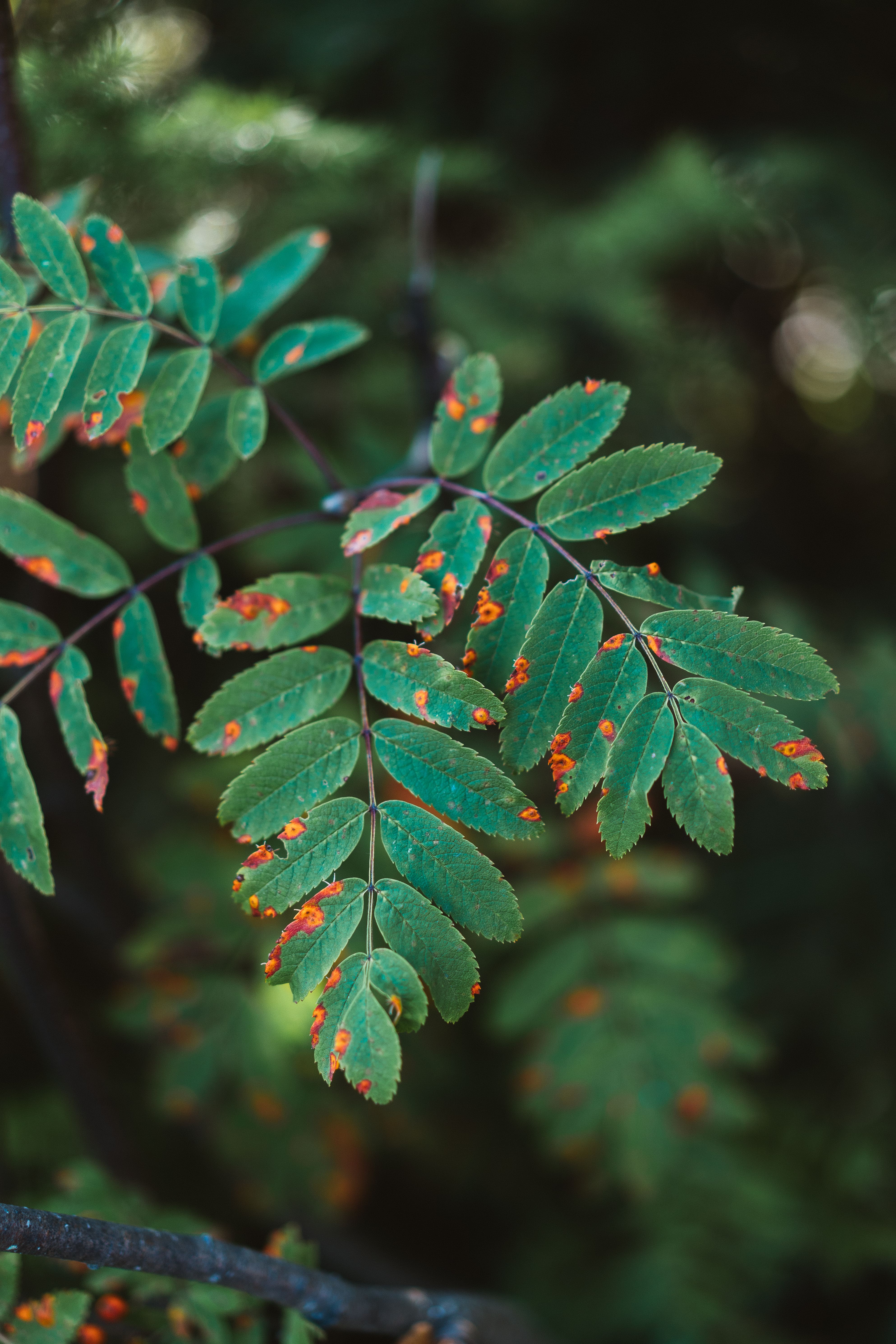 Dvuglavaya Hill is the southernmost summit of the Bolshoy Taganay ridge and the one closest to Zlatoust. It's distinctively split into two peaks, which gave rise to its name; the southern peak is known as Perya ('Feathers,' 1,034 m above sea level), while the northern one is called Baranyi Lby ('Rams' Foreheads,' 1,041 m). 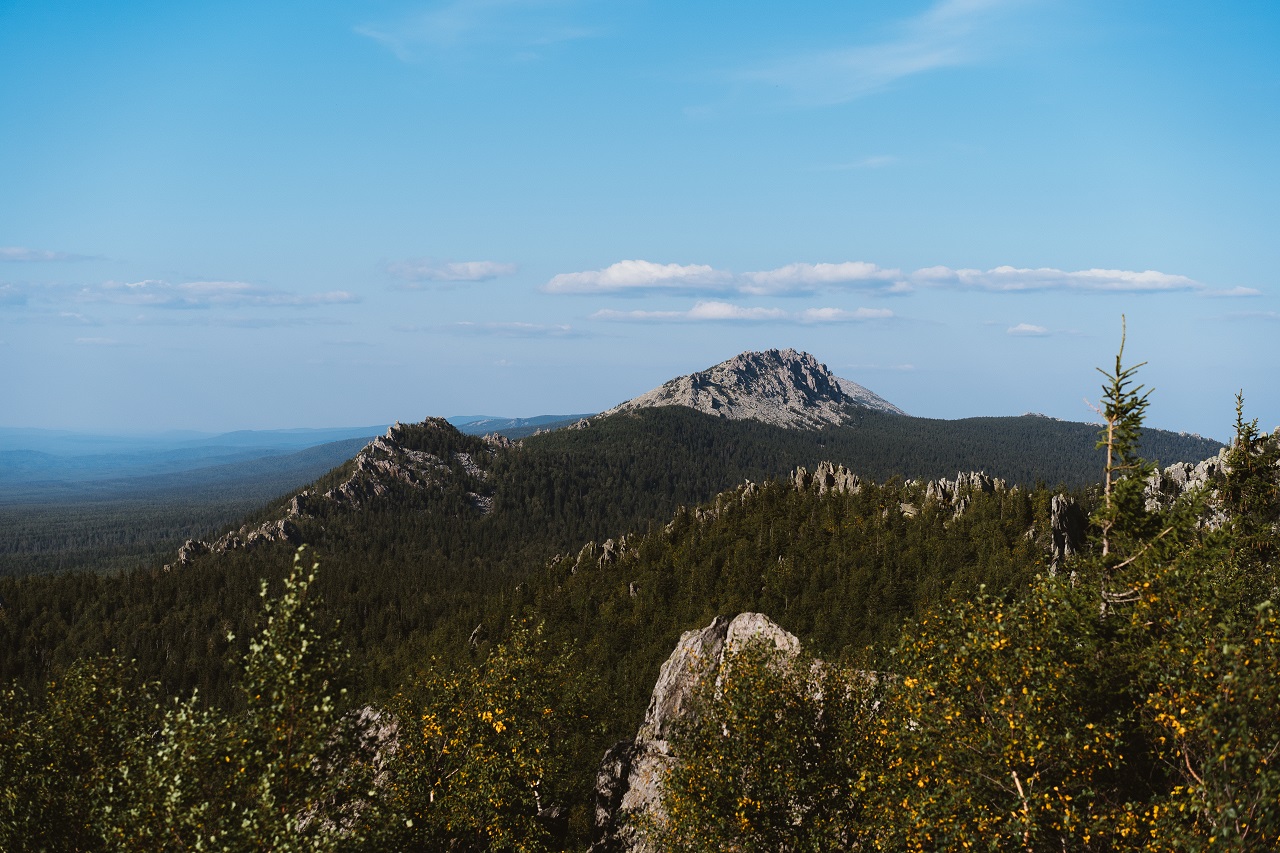 There are two pathways leading to the top: one goes via the Skalodrom granite outcrops, while the other goes through the White Well shelter. The second choice is preferred by tourists. From the White Well, a metal staircase rises three levels, almost to the very top. Although the ascent is a short one, it is quite steep. 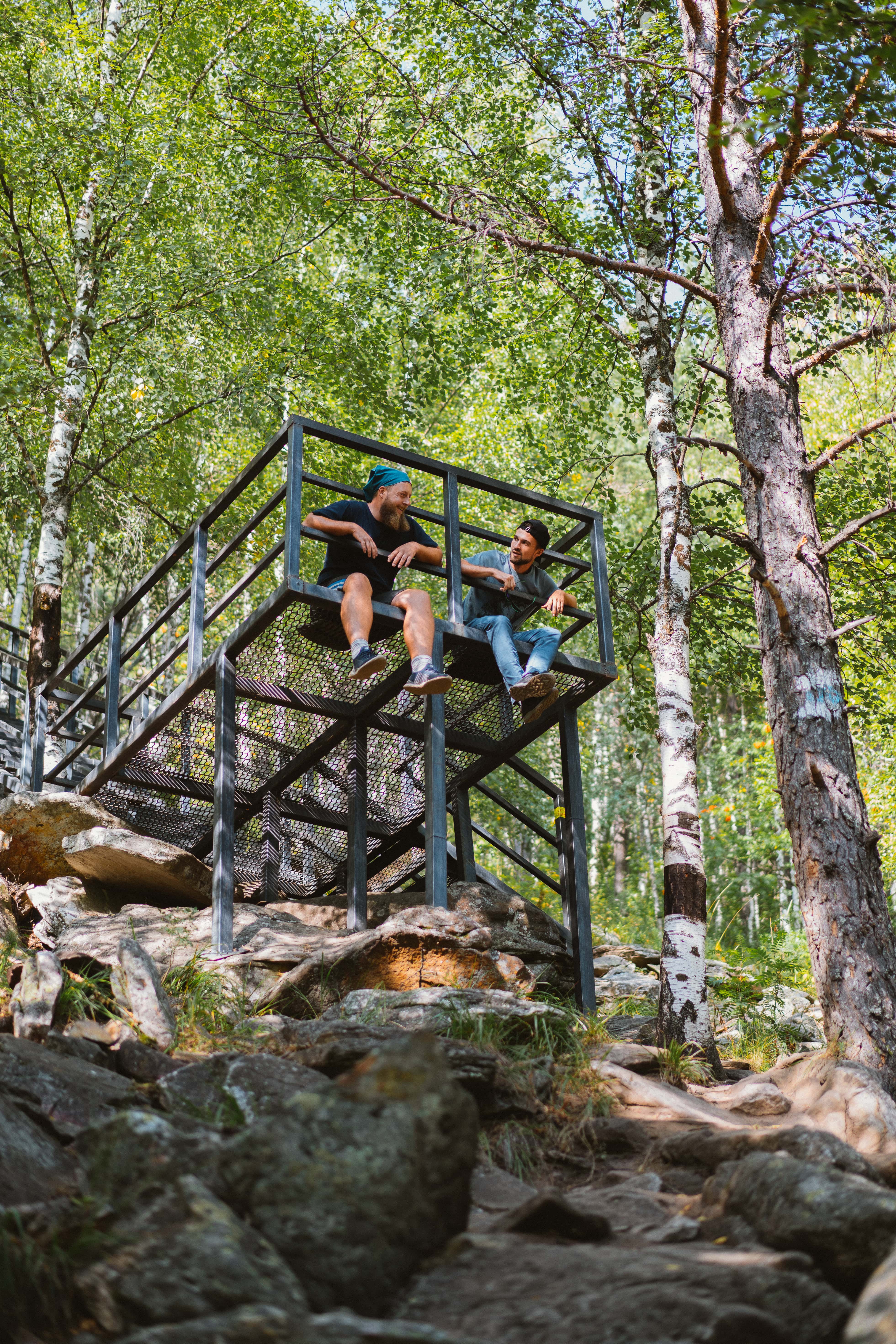 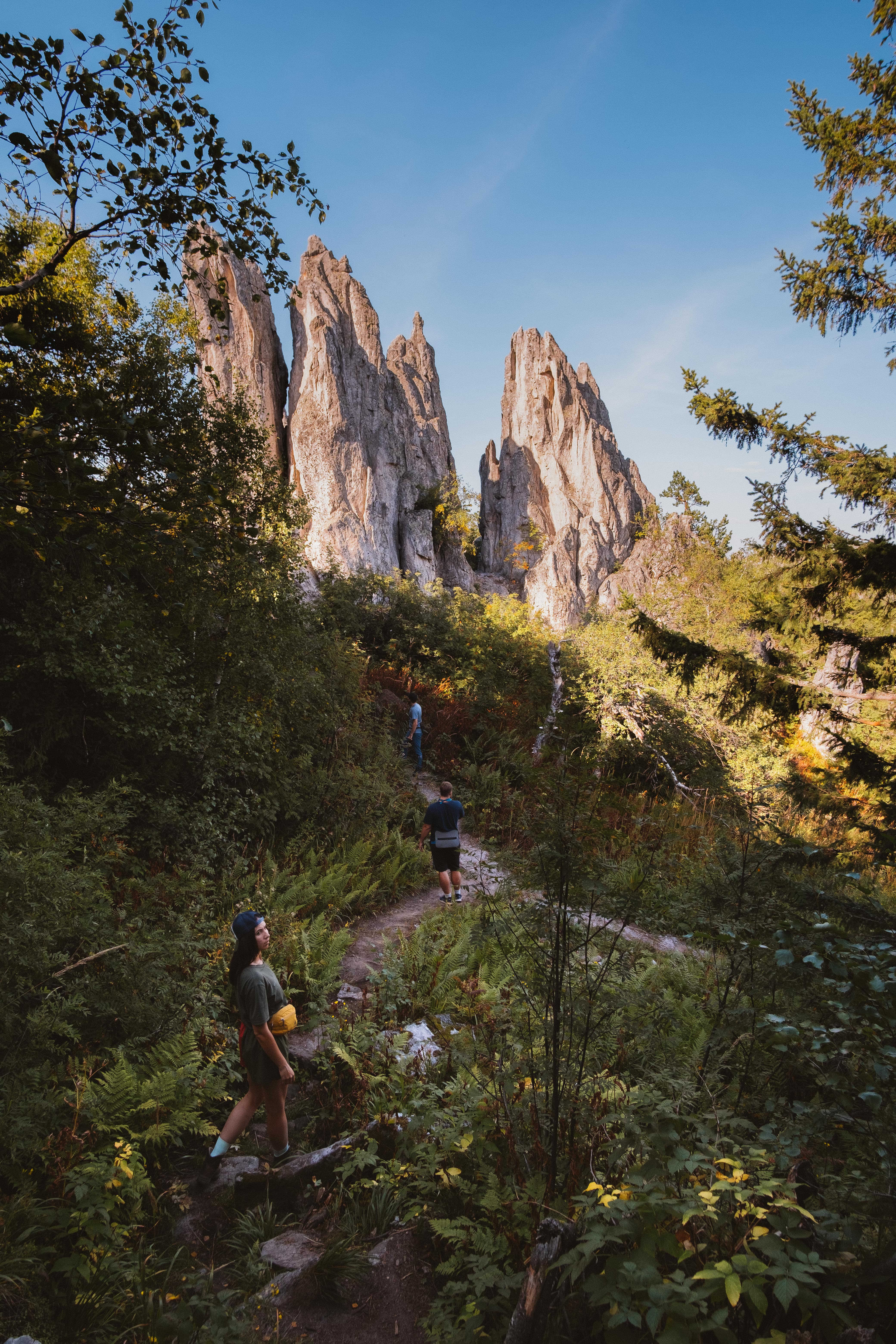 While less crowded, the path via the Skalodrom is also scenic. The sign and turn to the Skalodrom appear about 1.5 kilometres before the shelter.

"We adore the Dvuglavaya Hill because it offers breathtaking vistas of the park's other peaks, including the Kruglitsa and Otkliknoy Greben. The peak's distinctive shape, mimicking the wings and feathers of a bird fast ascending into the sky, is probably the reason it is so well-liked by tourists. Each of us pretends to be a bird like that, free and strong, when on the hill's observation deck. In clear weather, visibility range here is from 80 to 100 km." 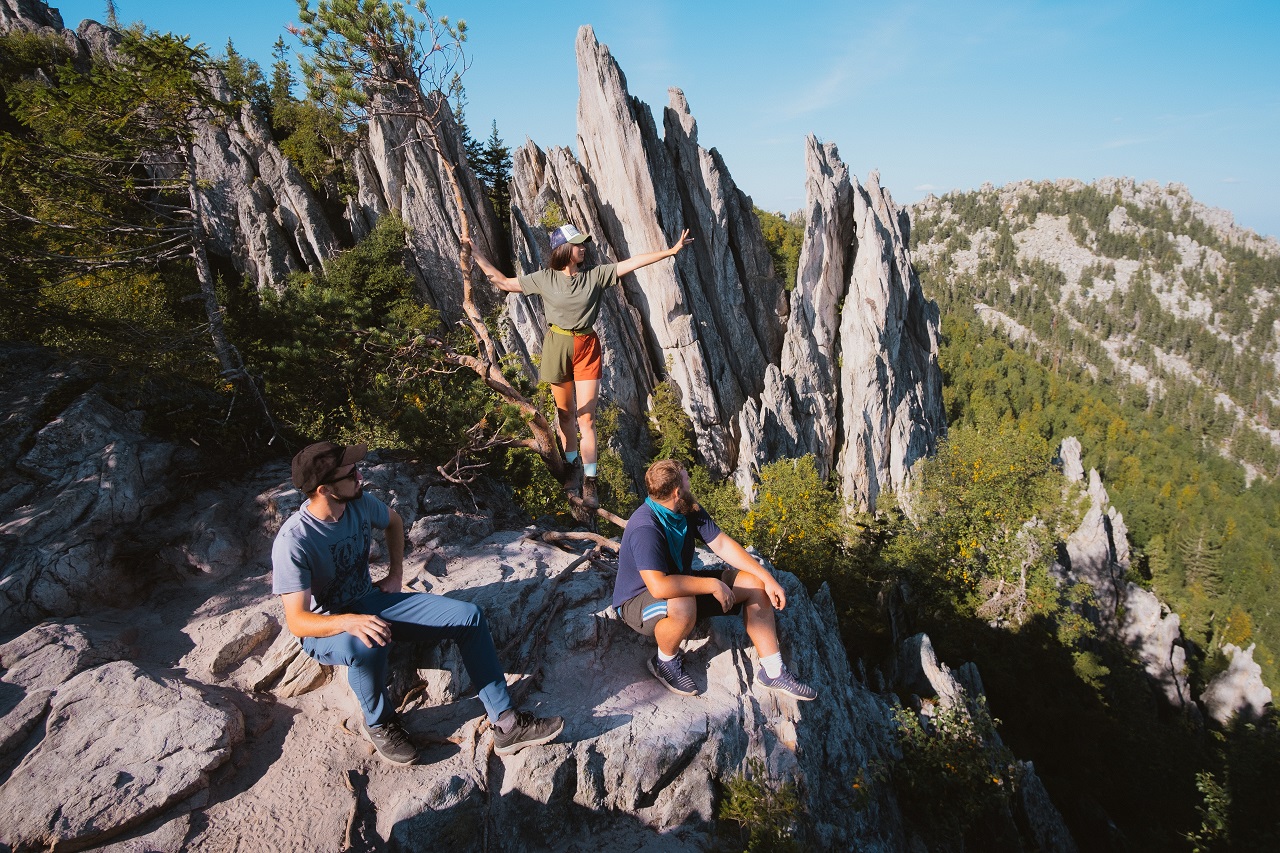 The guys are getting ready for an overnight stay at the White Well shelter after descending the Dvuglavaya Hill: they set up a tent, bought firewood from the inspector, and made a fire. It's time to think about your favorite songs while the kettle with delicious water from the well is heating up! 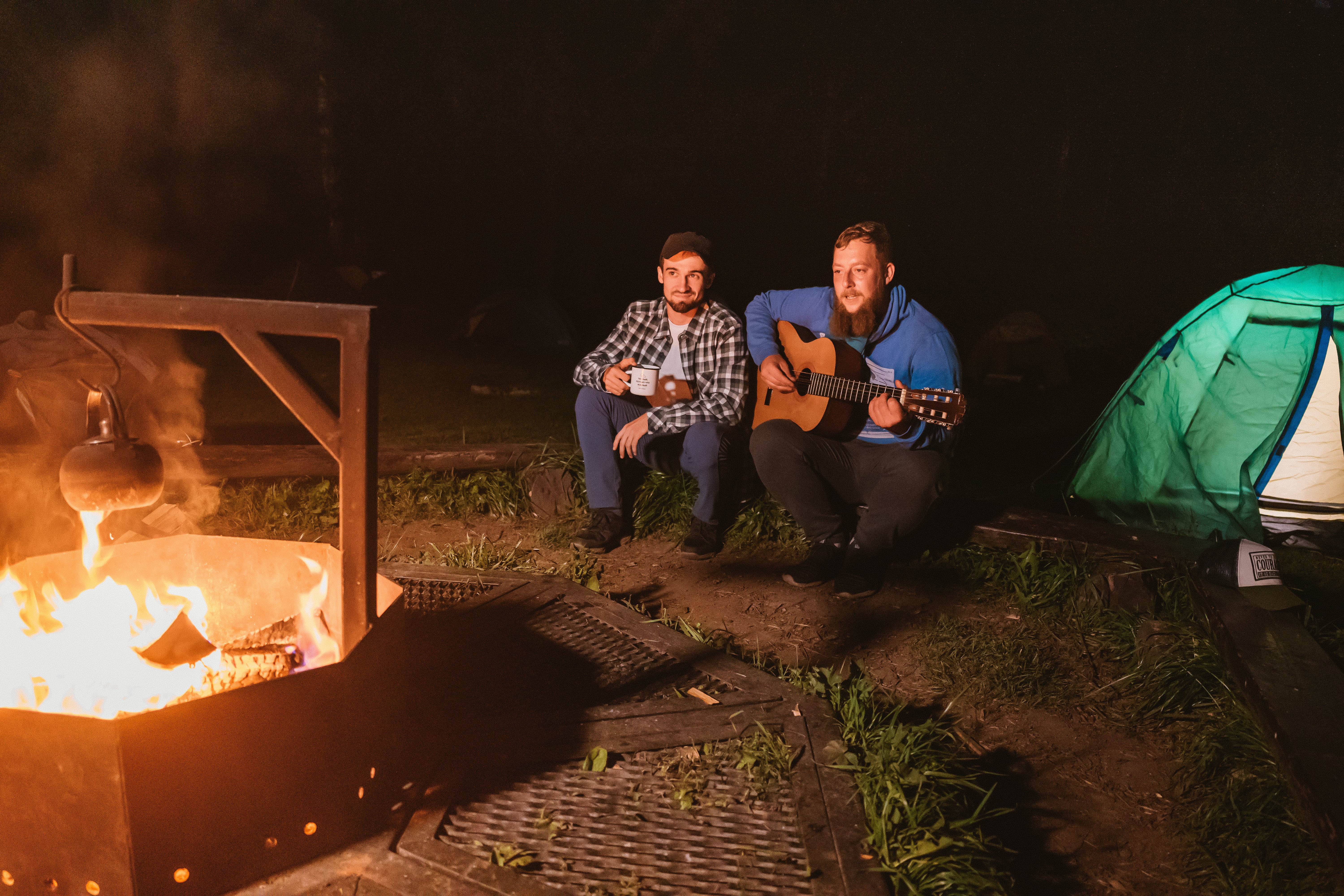 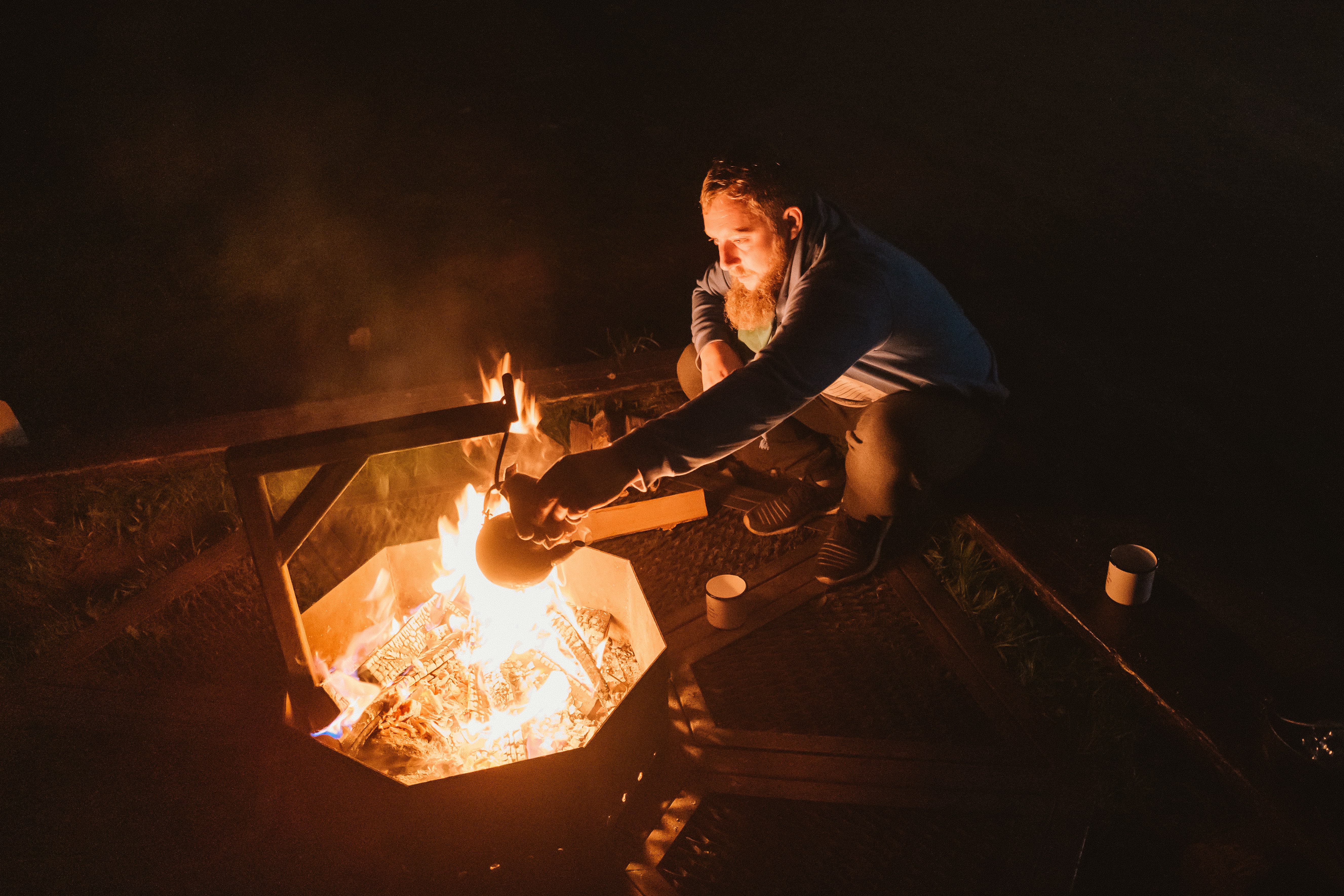 Only shelters or designated camplites are permitted for overnight stays in the Taganay National Park. The shelters feature campfires, flat, cozy clearings for pitching tents, a spring, gazebos for cooking, restrooms, and a sauna. There are guest loghouses and permanent multi-bed tents available for those who don't want to carry a tent here. 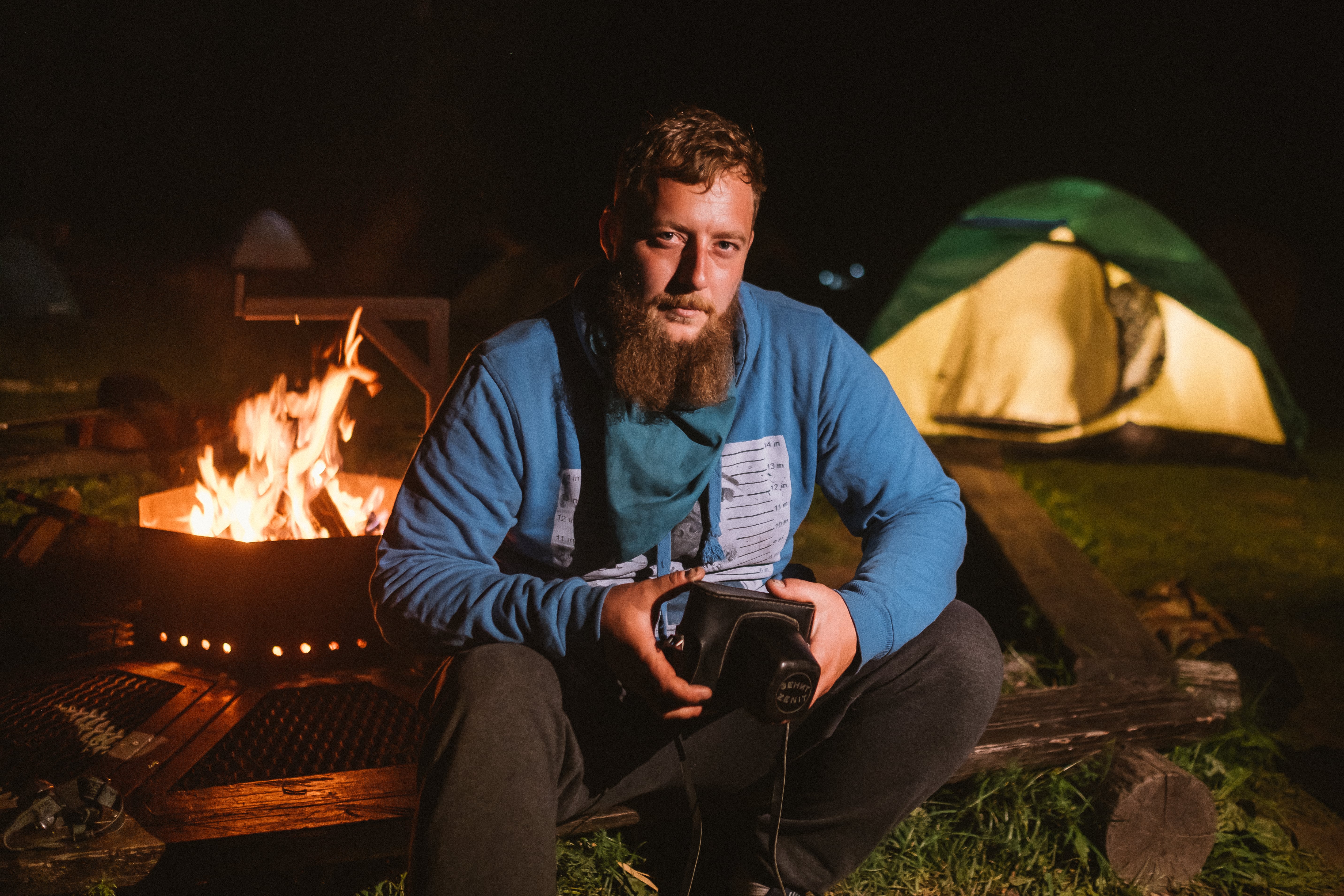 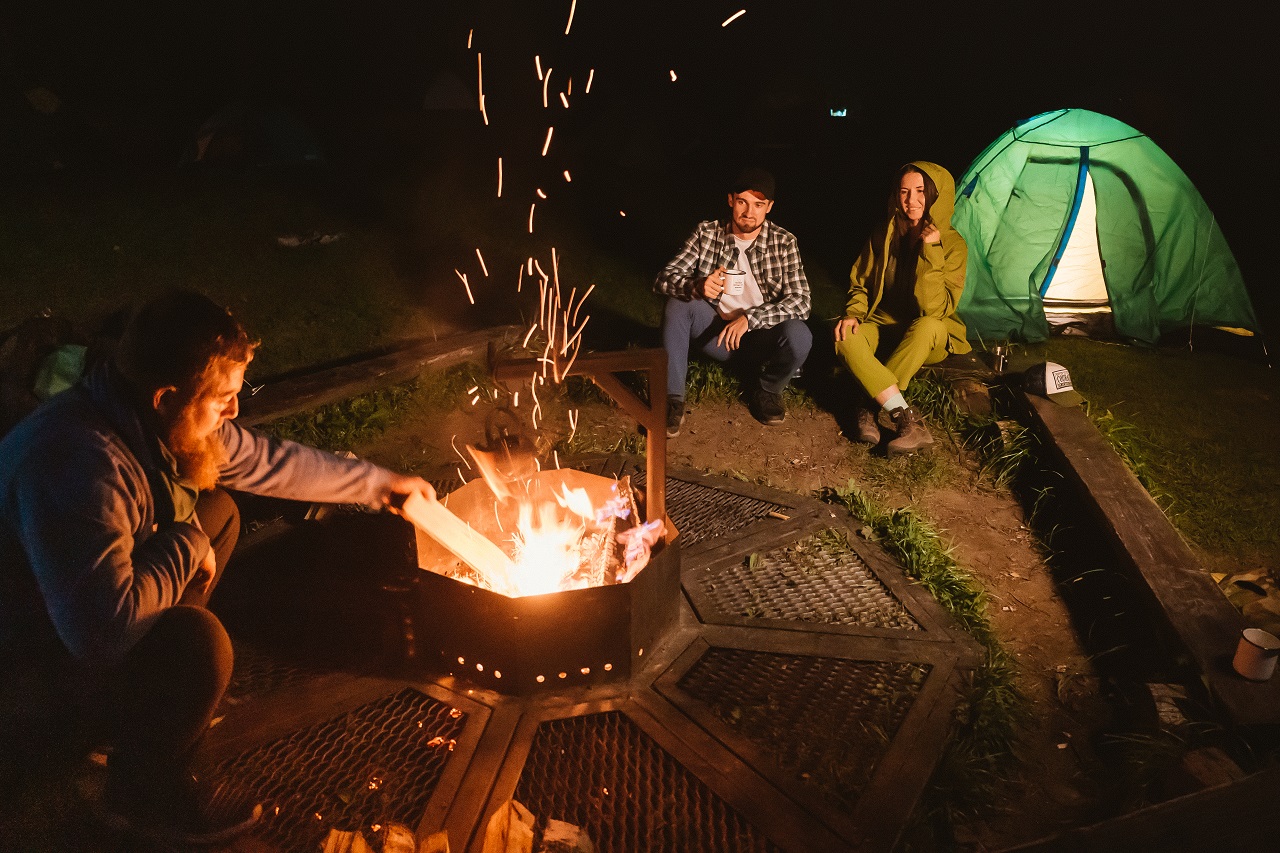 52 km – the park's length from South to North

9 ridges and 15 rivers in the park 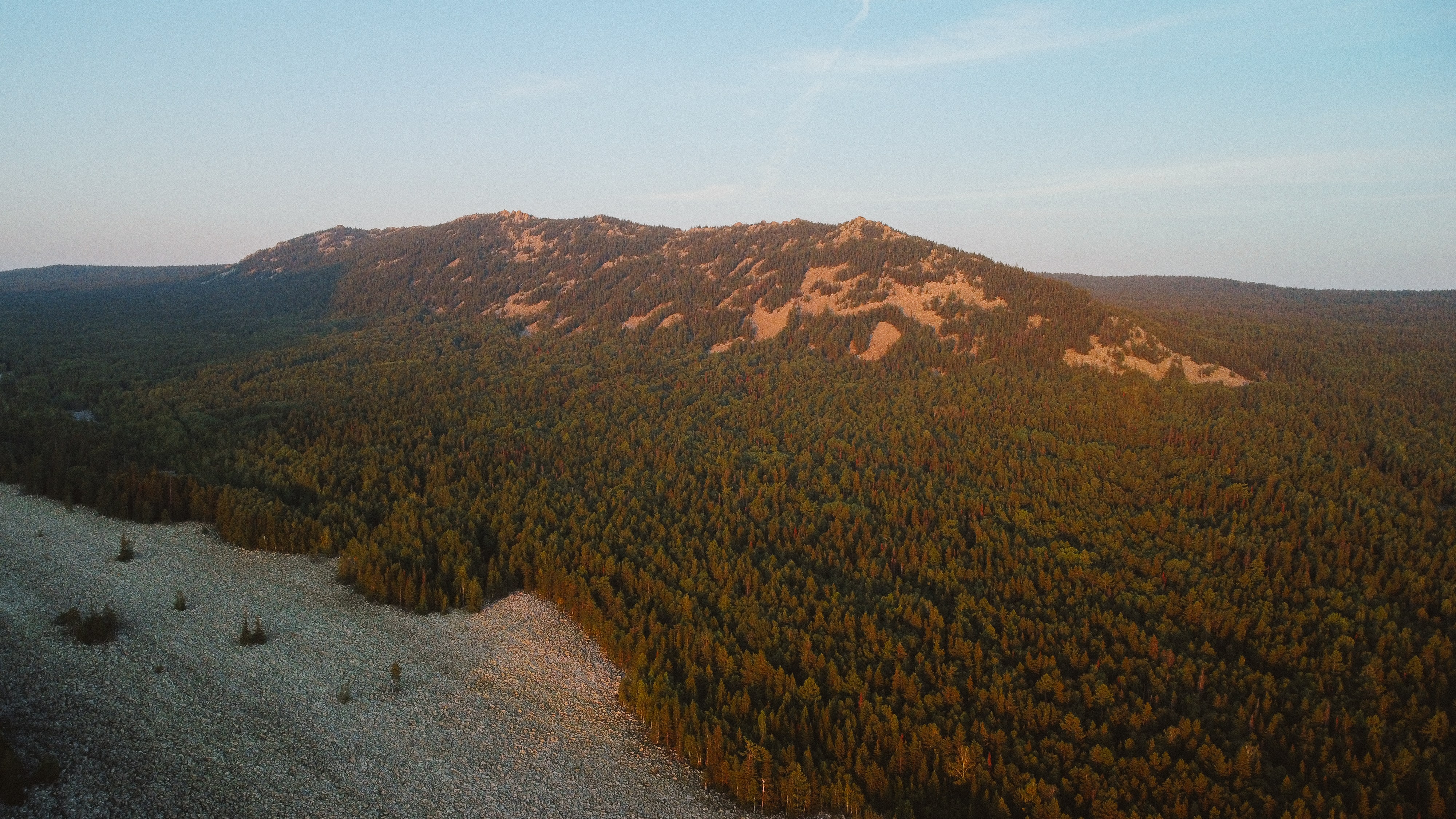 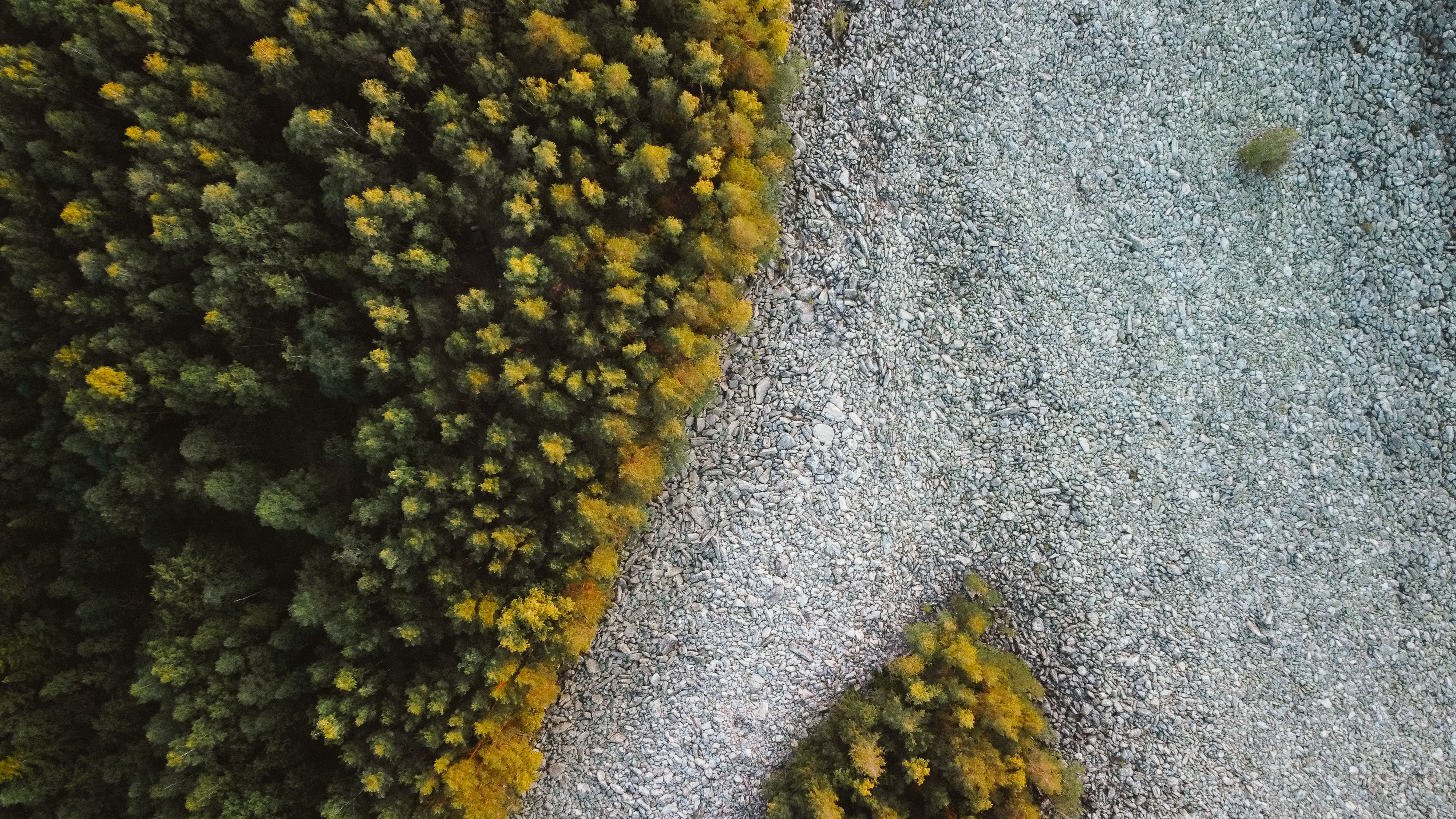 The quickest way to reach the Central Estate of the Taganay National Park is by car, from Chelyabinsk to Zlatoust and onwards. Along the M-5 motorway, Chelyabinsk is 143 km away. Travel time: about 2 hours.

There are two daily suburban electric trains from Chelyabinsk to Zlatoust, one in the morning and one in the evening. Additionally, a Friday express train runs there (on Sunday evening, the same train goes from Zlatoust). A railway ticket costs from RUB 450. Travel time: just over 3 hours. Take a minibus headed to Pushkinskiy Posyolok from the train station, and get off at the last stop (just 10 minutes). The distance to the Central Estate from the last stop is about 1.5 km. There are also several ways to get to Zlatoust via long-distance train. The route through the mountains is really beautiful!

You may board any bus from Chelyabinsk to Zlatoust during the day, beginning at 5.00 a.m. Tickets cost from RUB 350. Travel time: about 2.5 hours. Take a minibus headed to Pushkinskiy Posyolok from the bus station, and get off at the last stop (about 30 minutes). The distance to the Central Estate from the last stop is about 1.5 km. Zlatoust bus station is located at 21 Prospekt im. Yu. A. Gagarina, 1st line. Purchase a ticket in advance if you want to leave on Sunday. Unified website of bus stations in the Chelyabinsk Region: http://av74.ru.